No signal interruption for Fiesta Señor 2021 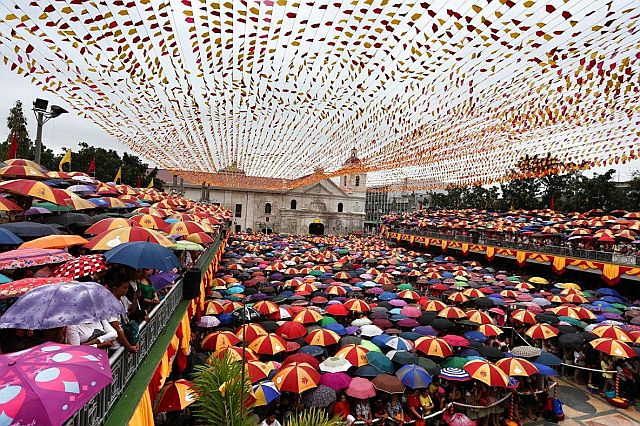 Umbrellas shield devotees who brave the rainy weather to attend one of the Novena Masses at the Basilica Minore del Sto. Niño during the Fiesta Señor in January 2020. (CDN File Photo)

CEBU CITY, Philippines — For the first time in three years, there will be no signal interruption in Cebu City during the celebration of Fiesta Señor this year.

The Cebu City Police Office (CCPO), in a press conference on Thursday, January 7, announced that they did not make any request to the National Telecommunications Commission (NTC) to shut down mobile phone signals for the weeklong event.

“We did not recommend for a signal shutdown unlike before,” said Police Lieutenant Colonel Wilbert Parilla, deputy director for operations of CCPO, in Cebuano.

Parilla said with all events for the Fiesta Señor 2021 confined in the Basilica Minore del Sto. Niño de Cebu, and within its immediate vicinities, they believed there would be no need to turn off telecommunications towers in the city.

“We did not request for interruption of networks. We have enough personnel to cover within and outside the perimeters of the Basilica,” he said.

At least 500 policemen in Cebu City will be deployed within and around the Basilica starting tomorrow, Friday (January 8), to enforce rules and regulations during the nine-day Novena Masses for Fiesta Señor.

A send-off ceremony and a Holy Mass were also conducted for the personnel tasked to do such mandates.

Parilla, in the meantime, said the police were now ready for Fiesta Señor.

Fiesta Señor, held every January, is the feast in honor of Señor Sto. Niño.

Due to threats of the coronavirus disease 2019 (COVID-19) pandemic, organizers of the event led by Augustinian friars from the Basilica decided to cancel all external activities and focus only on doing Novena Masses.

Since 2017, a signal shutdown has been part of Cebu police’s security preparations for the Fiesta Señor and its secular celebration, the Sinulog Festival.

The CCPO said they had not monitored any threats to security, and peace and order in the city in relation to the religious celebration. /dbs

RELATED STORY: Crowd limit to be imposed in areas outside Basilica for Fiesta Señor