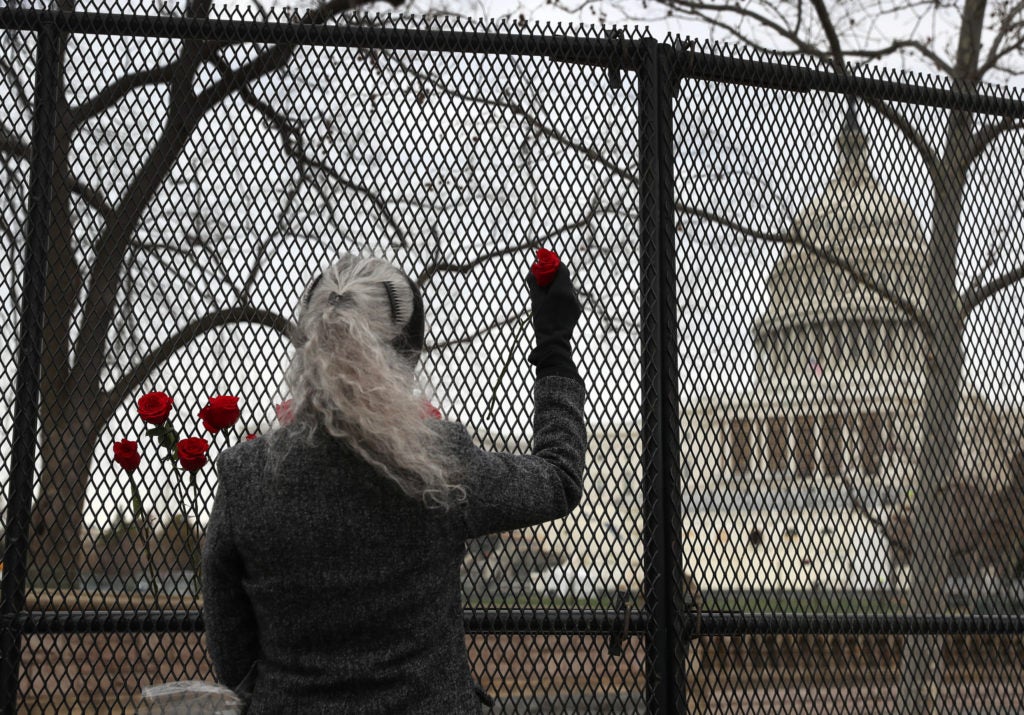 Patty Raine places roses in the fence near the U.S. Capitol Building two days after a pro-Trump mob broke into the building on January 08, 2021 in Washington, DC. Mrs. Raine said she was placing the roses in the fence to represent a gesture of peace among the American people. Democratic congressional leaders threatened to impeach President Donald Trump for encouraging the mob that stormed the Capitol Building. Joe Raedle/Getty Images/AFP

WASHINGTON – The US Justice Department announced Friday that it has charged 15 people involved in the assault on Congress, including one man accused of possessing bombs made to act like “homemade napalm.”

But Ken Kohl, a federal prosecutor with the Washington US attorney’s office, said they did not expect to charge anyone with “incitement” or “insurrection” in Wednesday’s violence, amid calls for legal action against President Donald Trump, his lawyer Rudy Giuliani and others for encouraging it.

The department unveiled the cases against 13 people, including Richard Barnett, a Trump supporter who invaded the office of House Speaker Nancy Pelosi, and Lonnie Coffman of Alabama, who was found carrying two handguns and had 11 Styrofoam-enhanced Molotov cocktails in his truck.

Others whose charges were unsealed include Christopher Albert of Maryland, who allegedly entered the US Capitol with a loaded handgun; and Mark Leffingwell, charged with punching an officer.

Most of the 13 were charged with illegal entry into restricted buildings of Congress, and violent or disorderly conduct.

They were also charged with impeding government functions after forcing the shutdown of a joint meeting of Congress to officially certify that Trump rival Joe Biden had won the November 3 election, which Trump had until Thursday refused to accept.

Barnett, famously photographed with his feet on a desk in Pelosi’s office, was charged with theft of stationery.

“The lawless destruction of the US Capitol building was an attack against one of our nation’s greatest institutions,” said Acting US Attorney Michael Sherwin in a statement.

Kohl said that not all the charges filed over Wednesday’s violence had been unsealed, and that more were in the pipeline as the FBI investigates.

“This investigation has the highest priority,” he said, with “hundreds” of Justice Department investigators working the case.

More charges and arrests were expected.

Around 40 people were arrested and charged by local Washington police, mostly for curfew violations, weapons offenses and unlawful entry.

But the charges announced by Kohl Friday were on the federal level and potentially carry heftier punishment.

He said the FBI was not investigating anyone on possible “incitement” or “insurrection” charges.

Some people have called for Trump, Giuliani, Trump’s son Donald Jr. and others to be charged with incitement for openly encouraging the president’s supporters to take action just hours before the mob stormed the Capitol.

“We don’t expect any charges of that nature,” Kohl said.