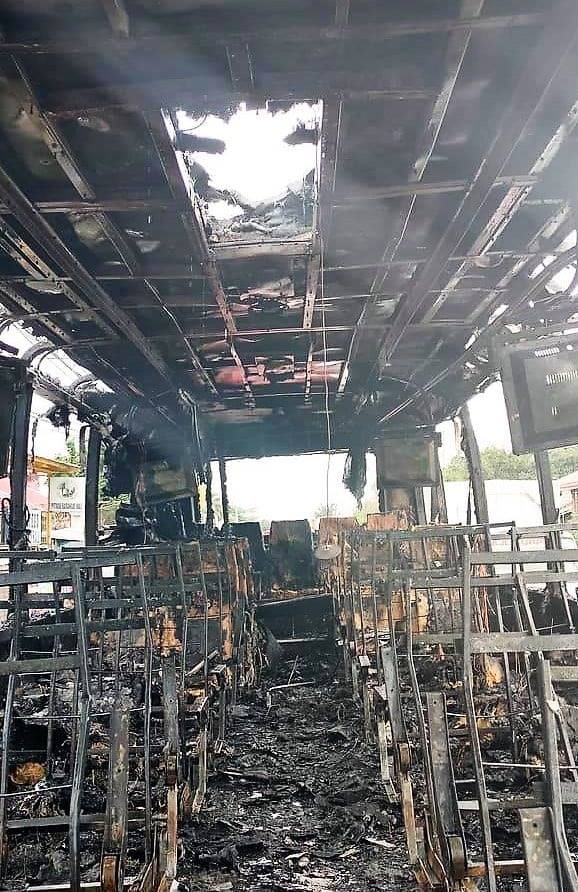 CEBU CITY, Philippines  – Fire investigators in Consolacion town continue to determine what may have caused the fire that burned a passenger bus while it was traversing the national highway in Barangay Pitogo on Saturday afternoon, January 30.

In an advisory posted by LGU Consolacion, Fire Officer 1 Jaypen Ango was quoted saying that damage caused by the fire reached P900,000.

Ango said that no one was hurt during the fire incident.  The bus driver and his conductor were also unharmed.

The fire alarm was reported to the Consolacion Fire Department at 1:45 p.m. It was placed under control by responding firefighters at 1:50 p.m. or five minutes later before it was declared fire out at 1:54 p.m.

Three firetrucks, two coming from the Bureau of Fire Protection (BFP) and another one coming from the Alegado Fire Volunteers, were used to spray water to the burning bus.

The LGU report said that bus driver Eduardo Lopez Pelayo was about to make a u-turn back to Cebu City after he unloaded passengers in Consolacion town when he noticed smoke coming out from the unit’s aircondition system.

READ MORE: Bus catches fire in Consolacion, no one injured

Pelayo and bus conductor Glenn Arnoza tried to put out the flame with the use of a fire extinguisher but it already spread and started to burn their unit.

Fire investigators in Consolacion, a first-class municipality located approximately 20 kilometers north of Cebu City, are yet to conclude their investigation on the bus fire. / dcb

Read Next
1st Mangrove Propagation Center in the Visayas opens in Cordova, Cebu