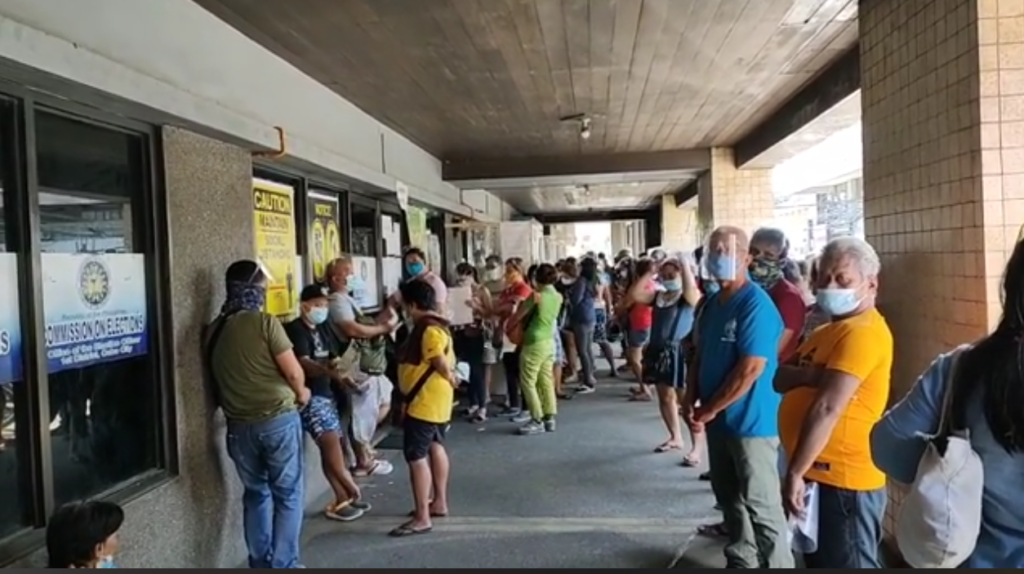 Vendors from Cebu City flocked to the Commission on Elections to acquire voters’ certificates as this is a requirement for their renewal of permits. The crowd prompted the Comelec offices to return the online appointment process. | Contributed photos

CEBU CITY, Philippines – The Commission on Elections (Comelec) in Cebu recorded a drastic drop in the number of registered new voters for the Presidential elections in 2022.

However, lawyer Lionel Marco Castillano, Comelec-Cebu election officer, said these figures are the lowest they recorded in recent history.

“We have been expecting very low numbers in terms of turnout because of the pandemic and lockdowns implemented last year,” Castillano said in Cebuano.

More than half of the registered new voters came from Cebu province, with 35,669.

Mandaue City’s number of registered voters in the same period is 4,711. Its neighbor Lapu-Lapu City recorded 3,002 only.

Although local elections officers here have not set a target as to how many voters should register for next year’s elections, Castillano admitted that present numbers paled in comparison to previous years.

“Today, it takes a week to achieve around 200 to 300 voters to successfully register. Before, we could record more than 300 in a single day,” he added.

The entire island-province of Cebu, with a population of roughly three million people, is the country’s most vote-rich province.

Before the coronavirus disease 2019 (COVID-19) pandemic struck, earlier reports showed that all Comelec offices here, combined, were able to register a combined over a million new voters for the entire registration period.

Last January 25, the central office of Comelec announced that it is way behind its target of registering four million new voters for the May 9, 2022, general elections.

Since voter registration resumed on Sept. 1, 2020, after the coronavirus lockdown, the Comelec had received 1,117,528 voter applications as of January 14.

The poll body has only about eight months left to register new voters before the period ends on Sept. 30.

“We are behind our target of 4 [million] new registrants,” Election Commissioner Rowena Guanzon tweeted on January 22.

“I will propose overtime for our personnel so we can extend registration hours,” she added.

Comelec offices are open Mondays to Thursdays, 8 a.m. to 3 p.m. to accept applications.

Before the pandemic, the Comelec scheduled the voter registration for next year’s elections from Jan. 20, 2020, to Sept. 30, 2021. The Sept. 30 deadline has not been extended.

The poll body suspended the registration on March 9, 2020, when the lockdown was imposed. / with reports from INQUIRER.net