69% of Filipinos believe worst of pandemic is over, SWS survey says 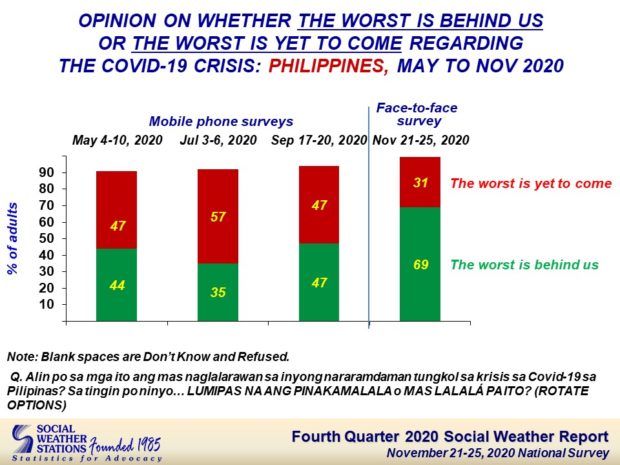 MANILA, Philippines — Sixty-nine percent of Filipinos believed that the worst is already behind them with regards to the Covid-19 pandemic, which infected a total of 543,282 people nationwide.

In its poll results on Thursday, February 11, 2021, the Social Weather Stations (SWS) said this figure is an increase from the September 2020 survey, which showed 47 percent of Filipinos believed that the worst has ended concerning the health crisis.

The November 2020 SWS poll also found that 31 percent of Filipinos said the worst is yet to come with the Covid-19 crisis. This is lower than the September 2020 survey with 47 percent.

The SWS also found that the percentage of people saying the worst is behind us is highest in Metro Manila with 78 percent, despite being one of the hotspots of Covid-19. This was followed by Balance Luzon at 69 percent, Visayas at 67 percent, and Mindanao at 65 percent.

(Which of the following best describes your feelings about the Covid-19 crisis in the Philippines? Do you think… the worst is behind us or the worst is yet to come?)

Read Next
Lucky Chinese Food for the Lunar New Year