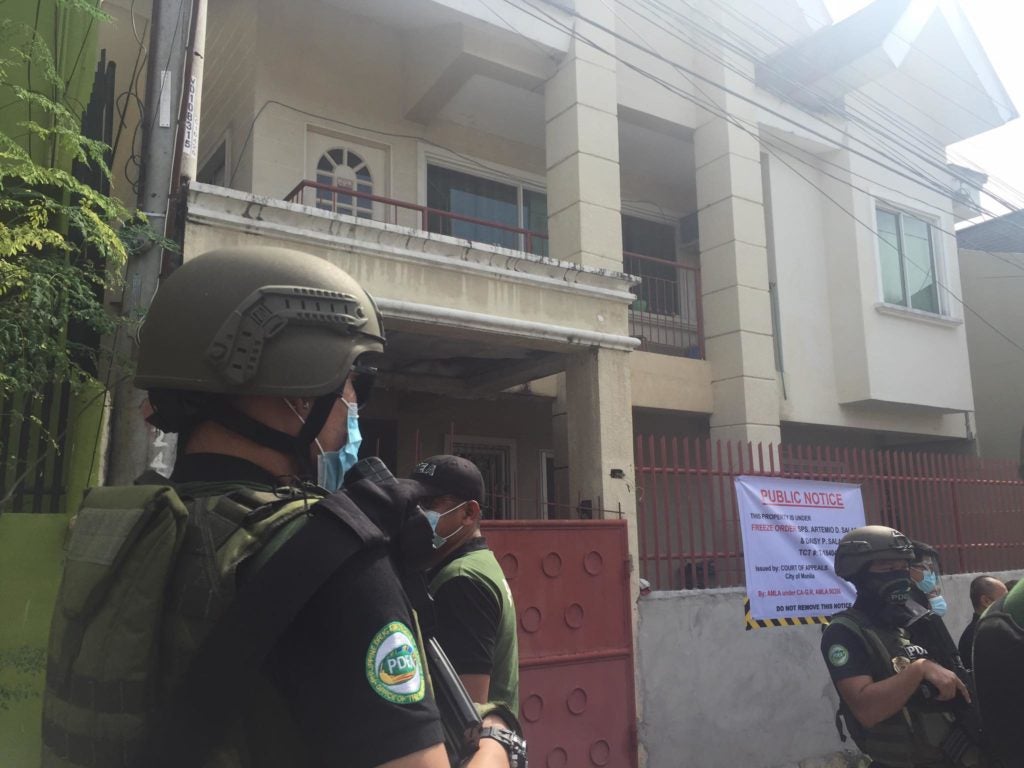 The Philippine Drug Enforcement Agency in Central Visayas and the Anti-Money Laundering Council serve a freeze order on a P5 milion property in Barangay Guadalupe in Cebu City allegedly owned by a couple, whom authorities identified as alleged members of a drug group. | Pegeen Maisie Sararaña

CEBU CITY, Philippines — Authorities are looking for more properties and assets of two alleged members of the Parojinog-led drug syndicate, the Kuratong Baleleng, after they froze a P5-million property allegedly owned by the two drug group members in Barangay Guadalupe in Cebu City.

Director Wilkins Villanueva, head of Philippine Drug Enforcement Agency in Central Visayas (PDEA-7), said in a press briefing on Monday, February 15, that they believed that the property in Barangay Guadalupe was not the only property that the Salas couple — Artemio and Daisy Parojinog Salas — owned.

Villanueva said that the Salas couple had pending warrants of arrest for illegal drug charges and had remained at large.

He also claimed that Daisy Parojinog-Salas is the sister of late Ozamis City Mayor Ricardo Parojinog, who was killed in a police raid in Ozamis City last July 2017.

He said that Ricardo was also the leader of the Kuratong Baleleng and the Salas couple were among their members.

The PDEA-7 led by Villanueva and representatives of the Anti-Money Laundering Council (AMLC) served the freeze order against the Salas couple on Monday and this was received by the daughter of the Salas couple.

Villanueva admitted that this freeze order was the last action to combat against drug personalities “to bleed them” of their own money.

“Kining tanan, na implement because of the court order from the special second division of the Court of Appeals, “Villanueva said.

(We implemented this (freeze order) because of the court order from the Special Division of the Court of Appeals.)

He also added that this property, located in a subdivision in Guadalupe, which amounts to P5 million, is the only property named after the Salas in Cebu.

Villanueva also said that they believed that Salas family had real estate properties in Ozamis, Leyte, and Cebu province.

He claimed that the couple allegedly laundered funds of the group, which were accumulated from the sales of their illegal drug operations.

Baculi said family’s accounts had millions which did not meet or commensurate with their declared source of income which is P20,000.