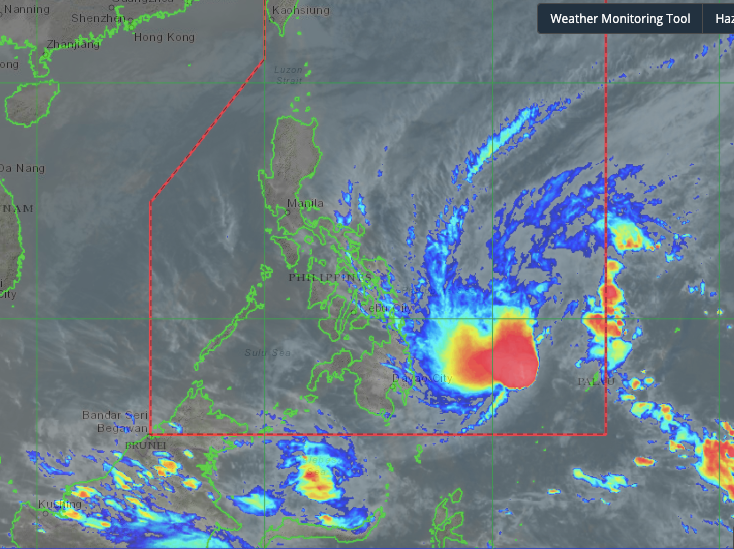 Satellite image of TS Auring on February 18, 2021 from Pagasa

Ramil Ayuman, the head of the City Disaster Risk Reduction and Management Office (CDRRMO),  said the disaster team has conducted an emergency meeting on Thursday afternoon, February 18, 2021, to prepare for the upcoming storm.

The CDRRMO has also alerted the barangays for the possibility of flashfloods and landslides with the storm moving at a speed of 65 kilometers per hour (kph) with gustiness reaching up to 80 kph in a northwestward direction.

Ayuman added that the rains expected could reach up to 100 millimeters (mm), a volume of water enough to cause flooding in the low-lying areas of the city.

The barangays with sitios located along the riversides are asked to evaluate these areas for the need for a preemptive evacuation.

Similarly, mountain barangays are also asked to conduct preemptive evacuation for landslide-prone areas and advised motorists to avoid certain routes that may be in danger of falling rocks as well.

Heavy equipment are now placed in strategic barangays in the mountains in case of landslides while emergency vehicles are on standby starting tonight to respond to any emergencies.

Ayuman urged the public to not take the storm lightly as its eye may well fall in Cebu Island, bringing heavy rains and strong winds for the weekend.

Evacuation bags must be prepared including flashlights, food, water, and other essentials, especially for residents living in the danger zones. They must also be ready to evacuate anytime.

The CDRRMO also encouraged residents to charge their gadgets, batteries, and power banks in case of power interruption, as well as store water in case the water supply is disrupted.