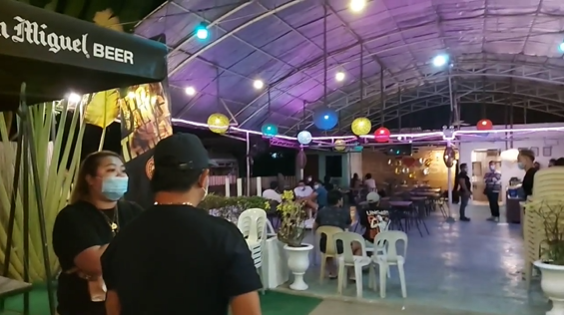 Lapu-Lapu City Mayor Junard “Ahong” Chan inspects on on Saturday, February 20, 2021, a bar in Barangay Pajo as the city implements a ban on liquor and on the operation of karaoke and videoke bars. | Lapu-Lapu City PIO

Aside from that, two establishments will also be penalized for violating Executive Order No. 2021-010, which took effect on February 20. The EO involves the ban on liquor, karaoke and videoke bars as part of the measures to prevent the spread of COVID-19.

Chan said that at around 12:30 a.m. on Saturday, authorities have apprehended 18 individuals, whose ages ranged from 21to 40 years old, who were having a drinking spree at a bar in Barangay Pajo.

The mayor said that they would be charged for violating the curfew ordinance of the city and would be fined P1,000 each.

The city implements a curfew from 10:00 p.m. to 5:00 a.m., except for frontliners and Authorized Persons Outside Residence (APOR) workers.

Read: Chan to ban sale of liquor in Lapu-Lapu City

Chan said that they would also sanction the erring establishments with the City Licensing Office (CLO) looking at the possible charges to be filed against the establishment owners.

Beyond midnight on Sunday, February 21, 2021, authorities have also apprehended 21 Chinese nationals, having a drinking session in a Chinese national-owned establishment at Barangay Mactan.

The Chinese nationals were also asked to pay the fine before they were released.

He also said that the CLO had already looked into the violations of the establishment and what charges they would file against the establishment’s owners — these include violating the liquor ban, curfew, non-display of a permit, misdeclaration of gross income, and having only one permit for three establishments.