Rescuer in Tandag City saves lives, including a drowning dog during #AuringPH 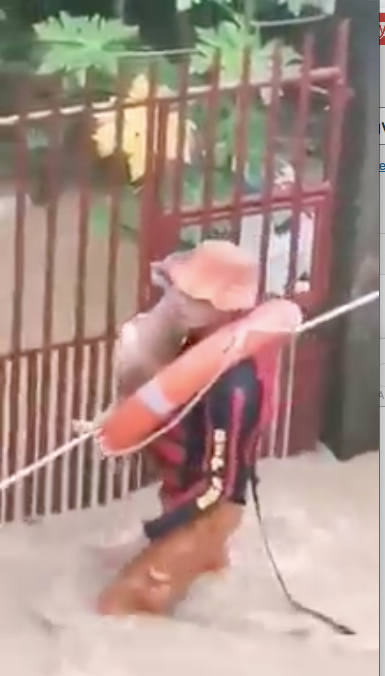 CEBU CITY, Philippines— A rescuer makes sure he is true to his oath in rescuing lives.

May it be a human life or an animal’s life.

The video showed Calihat wading through the floodwaters despite the strong current while carrying a dog.

(The dog was carried away by the strong current of the water. Fortunately, I was there at the area so I rescued the dog as part of our job which is to save lives and properties.)

(Because if we did not rescue the dog then, there was a possibility because of the strong current that the dog would be carried away to the river where the dog might drown.)

It happened at around noontime yesterday, February 21, when tropical storm Auring was bringing heavy rains over in Surigao del Sur.

Calihat said that they were evacuating other residents in the area when he chanced upon the drowning dog.

He said that it was one of three dogs that they had saved that day.

Today, over in Tandag City, they are now experiencing better weather conditions.

Calihat and some other rescuers are manning the evacuation centers and are still monitoring the areas to ensure others are safe as well. /dbs