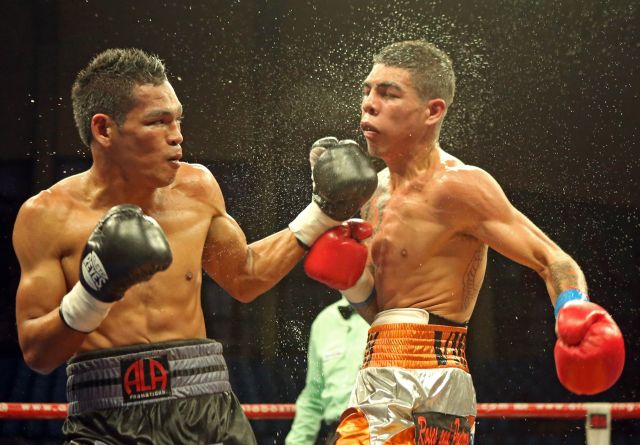 In this 2015 photo, “King” Arthur Villanueva tags Victor ” Spock” Mendez with a left in their main event showdown of the Pinoy Pride 34.

CEBU CITY, Philippines—Former ALA Boxing Gym stalwart “King” Arthur Villanueva is about to start a new chapter in his boxing career.

This time, he hopes there’s going to be a happy ending.

The 31-year-old Villanueva from Bago City in Negros Occidental is set to see action again when he faces Bryan Tamayo of Malabon City in the undercard of Omega Pro Sports International’s (OPSI) “Kumbati 9” fight card slated March 27, 2021, at the IPI compound in Mandaue City.

Read: OPSI to feature two boxing events in one day

Villanueva was once a top prospect in Philippine boxing, but his bid of becoming a world champion was derailed twice.

(I feel I can still fight. I feel I have something that I haven’t achieved as a pro boxer.)

Villanueva’s first crack at a world title was in 2015 in the United States, where he faced McJoe Arroyo. He lost that bout by technical decision.

As a display of his resiliency, Villanueva bounced back from that setback by winning  three straight fights, bagging the WBC international super flyweight and WBO Asia Pacific bantamweight straps along the way.

But in 2017, he lost to African Zolane Tete in the United Kingdom for the WBO interim world bantamweight title.

Villanueva again recovered and managed to fight five more bouts, one was another shot at a world title.

However, he lost to the heavily favored Nordine Oubaali for the WBC world bantamweight title in Kazakhstan in January 2019. He refused to continue the fight before the seventh round started.

After that, Villanueva considered retirement, especially when ALA Boxing Gym closed its doors in 2020.

But the COVID-19 pandemic changed his plans.

(There are a lot of reasons why I am returning to boxing. First, is Covid. If not for the pandemic, I might have been working as a trainer abroad. Second, is this offer to fight again. I feel I still can fight.)

Villanueva says that with this chance, he  now wants to test himself anew.

“Akong goal is suwayan nako kausa pa ug fight ug world title,” Villanueva said, who has been training here in Cebu for a month now under the tutelage of John Wild.

(My goal is to fight one more time for a world title.)

Even though he dwarfs Tamayo’s record of 6-1-2 (win-loss-draw) and two knockouts, Villanueva said there is no room for complacency.

(We shouldn’t underestimare my opponent because he remained active in training while I stopped. But like before, if I have a chance to finish it early, I will finish it.)

Read Next
UCMed pledges to donate AstraZeneca vaccines to gov’t