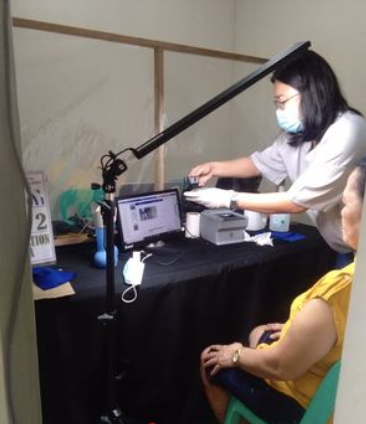 A woman prepares to have her photo taken for the National ID System at the Philippine Statistics Office (PSA) at the second floor of the Mandaue Public Market. | Photo courtesy of PSA

LAPU-LAPU CITY, Philippines — More than 1,000 individuals in Mandaue City have already registered to the National ID System of the Philippine Statistics Authority (PSA) since Thursday, March 18, 2021.

Jeson Abejuela, Registration Officer 2 of the PSA Cebu Province, said the Philippine Identification System (PhilSys) was one of the government’s programs to establish it for all the citizens of the country for easier application to assistance and programs from the government.

Abejuela said that people could also use the ID when there would be transactions.

Abejuela said if there would be financial assistance from the government the money would directly go to their bank accounts.

The PSA has partnered with Landbank. This means that as you register for the national ID you would also have a bank account.

Abejuela said that currently they would not accept walk-in applicants.

He said the applicants they accommodated were the ones who had been pre-registered last November 2020.

He said late last year was their pre-registration where their personnel simultaneously went house to house.

He said in Mandaue, more than 22,000 individuals were prioritized to receive the national ID and most of them were indigents or poorest of the poor.

They had already been texted on their schedules and given appointment slips that they would bring together with other documents needed on their registration day.

Those, who were already registered, will wait for 45 days and the I.D. will be sent to their houses via a PSA courier for free.

As of the moment, Jeson said the PSA would be releasing an online registration soon where the public could pre-register.

(Our target for this is that all should have [national] ID. What we prioritized are those who have no IDs especially those from the mountains.)