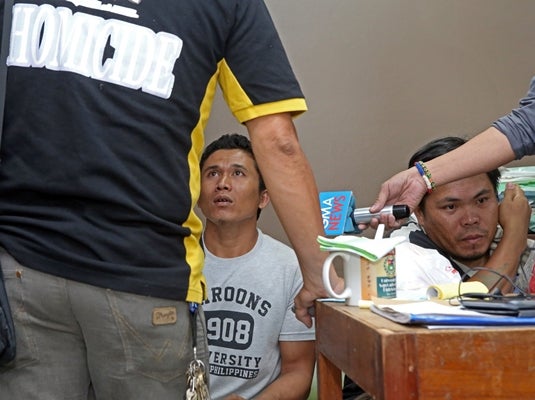 (How are you, sir? Therapy can take care of that.)

These words of assurance were the last spoken by orthopedic surgeon Cris Cecil Chan Abbu before he was shot in the chest by a 72-year-old patient in a wheelchair who went to his clinic in Cebu City.

The patient, Wilfredo Sabonsolin, then shot himself in the head with the same .38 caliber pistol about 10:30 a.m. yesterday.

The killings left in shock colleagues of the doctor, who was known for his kindness in treating indigent patients for free.

Sabonsolin, an ex-seaman, was one of his charity cases since 2010 and had his first two operations for a herniated disc handled for free by the surgeon, who headed the Physical Therapy Rehabilitation Center in Sacred Heart Hospital on U. Urgello Street.

The senior citizen had a third operation last December.

Staff members in the clinic said the two men were calmly talking just before the shots were fired.
Sabonsolin, a regular patient, went to the clinic for his physical therapy session.

“Maybe the patient was suffering from depression. Eyewitnesses support the fact that the two were just conversing,” said lawyer Inocencio dela Cerna, spokesman of the Southwestern University which owns the private hospital.

He said that aside from the patient’s state of health, there were personal burdens that could have affected Sabonsolin’s frame of mind.

The ex-seaman’s wife suffered Alzeihmer’s disease and their son also suffered from a spinal injury that has left him in a wheelchair for 20 years.

Abbu, 56, was fatally shot in the heart and right arm.

Just before shots were fired, Sabonsolin said he wanted to talk with the doctor privately. The request prompted other staff members, including the patient’s companion who pushed the wheelchair, to move away to give them some privacy.

Sabonsolin carried a sling bag where the gun may have been kept. He fired twice at point blank range before turning the gun on himself. He slumped dead on the wheelchair.

Before his back injury, Sabonsolin was athletic and a runner, according to a nephew.

With his affliction, he could walk with the aid of cane before the operation, but after three operations and therapy, he still had difficulty standing and walking.

The head of the clinic’s physical therapists Jane Hermosisa, interviewed on GMA 7 after the shooting, said that Sabonsolin recovered the use of his legs after the first operation but he was “not compliant” with the doctor’s orders to avoid “strenuous exercises” like lifting weights.

The former seaman would reportedly insist on doing situps at home, which placed a strain on his weak back.

A second operation was done because of “scarring” in his lumbar area, she said, arising from pressure on his spine.

The therapist said Sabonsolin could walk, and had rehabilitation therapy, but she observed that “he was depressed.”

Asked what kind of relationship the doctor had with him, Jane said they got along well.

She said the staff were all surprised at the violence that erupted past 9:45 a.m.

Sabonsolin went to doctor’s clinic for his regular check-up since he could not stand and walk after his last spine operation in December last year.

The patient’s helper, 27-year-old Renel Tanelon, who accompanied him to the clinic said he had no idea the older man was carrying a gun when they arrived by taxi at the hospital from their home in Ma. Teresa Phase 2 in barangay Guadalupe.

They arrived past 9 a.m and entered the hospital’s emergency room to the back of the building where the physical therapy center is located.

Tanelon said the guard frisked him but not Sabonsolin, a frequent visitor of the hospital for weekly therapy sessions.

Inside were about five people inside including him, the doctor, Sabonsolin, another patient, and a receptionist.

When Sabonsolin met the doctor, the surgeon greeted him: “Kumusta naman ka, sir?”. (How are you?)

This time, the doctor assured him: “Mada ra na sa therapy.” (Therapy will take care of that.)

A short time after, Tanelon said saw his employer whom he calls “Tatay” pull out a gun and shoot the doctor twice.

The helper said he rushed to the old man’s side and asked him why he shot the doctor, but Sabonsolin did not reply.

Seeing Sabonsolin still holding his gun, Tanelon said he got scared and ran out of the center, where where he heard a last burst of gunfire.

Tanelon said he believed that his “Tatay” shot himself.

Eric Dictatoria, a gardener who was outside the clinic when he heard gunfire and found the doctor sprawled on the floor in a pool of blood. He then saw Sabonsolin shoot himself.

Paramedics entered and rushed Abbu to the emergency room to try revive him but he was declared dead at 10:30 a.m. by physicians James Guardiaro and Ferdinand Kionisala.

The shootings have prompted a review of security procedures in the SWU compound.

A crisis committee was formed yesterday to look into this, said dela Cerna, the school’s legal counsel.

“Who would have thought that a man on wheelchair who has been a charity patient would bring a gun inside?” he said.

The remains of both doctor and patient were brought to the St. Peter’s Funeral Chapel on Imus Street for a vigil wake.

Surgeon dies after being shot by patient

Doctor had a ‘good heart’, helped many with free services