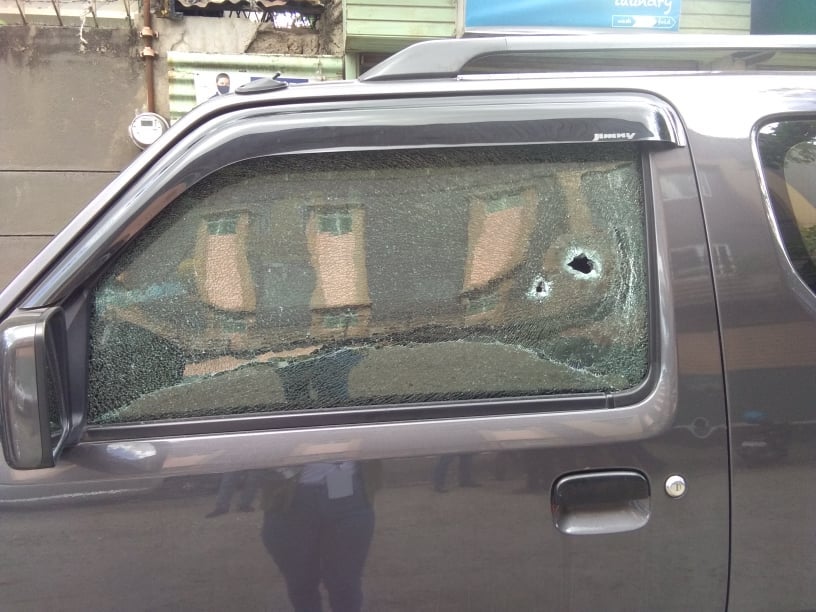 Bullet holes are seen on the left window of a car after a female Korean national was shot and wounded by an unidentified assailant in Barangay Banilad, Mandaue City at past 9 a.m. today, April 12. | Mary Rose Sagarino

Jiyoung Lee, who suffered gunshot wounds in the face and elbow, was in stable condition in the hospital, said Police Staff Sergeant Cabello, Mandaue City Police Office investigator, in a phone interview. The Korean national was inside her Suzuki Jimny parked along P. Remedio Street in Barangay Banilad, Mandaue City when she was attacked by an unidentified motorcycle-riding gunman at past 9 a.m. today, April 12. | Mary Rose Sagarino

According to the police report, Lee together with her driver arrived at her neighbor’s laundry shop along P. Remedio Street at 9:15 a.m. The gunman, who was on an Honda XRM motorcycle waited for the driver to get off the vehicle and enter the laundry shop before he made his move.

The gunman, who was wearing a blue helmet and face mask, white long sleeve shirt and maong pants, then approached the passenger’s side of the vehicle and fired at the left window of the vehicle where Lee was sitting. The assailant then fled on his motorcycle.

Lee was hit in the face and elbow and was rushed to the hospital for treatment.

Cabello said they were still investigating the shooting and were still trying to find out the motive behind it.