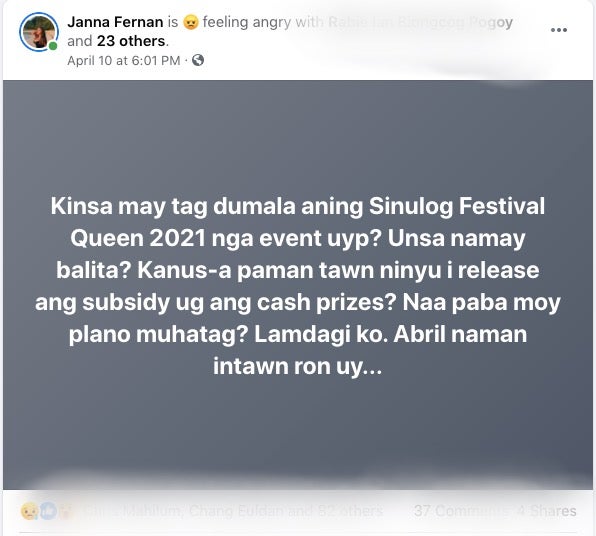 CEBU CITY, Philippines— Three months after the Sinulog 2021 festivities, handlers and talents from the Sinulog Festival Queen competition are still waiting for their prizes and incentives.

The prizes were promised to be given a week after the celebration.

Janna Fernan one of the handlers and makeup artists of the said competition posted on her Facebook account about her dismay regarding the delay in the releasing of the prizes.

Fernan who is from Pardo started participating in the Sinulog Festival Queen in 2017.

In an interview with CDN Digital, she said she was handling SK Lahug and Barangay Tisa representatives during the Sinulog Festival Queen competition.

She said that they respected the organizers of the competition and did not bombard them with reminders about the subsidy, but now that it has already reached months of not knowing when the subsidy will be released she finally decided to speak up.

CDN Digital is still trying to get the side of the City Treasurer regarding the matter. /rcg

Read Next
Open yourself to these things in life