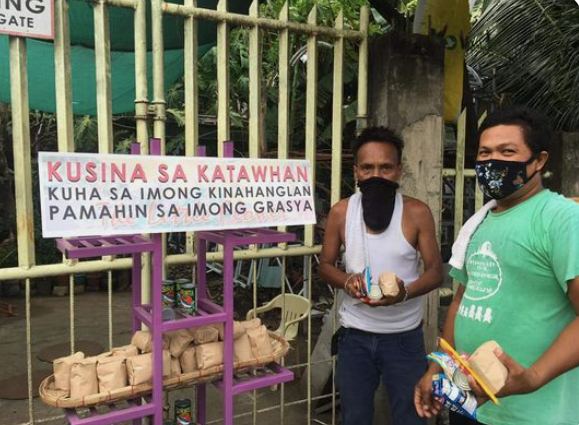 A family in Cordova town in Mactan Island has set up the “Kusina sa Katawhan”, a community pantry, in the town where people in need can get food and a place where those who have extra can donate for those in need. | Photo courtesy of Rico Nuñez

LAPU-LAPU CITY, Philippines — Community pantries are also sprouting up in Cebu with a family in Cordova town being one of the first in the island to set up one, which is about a week after the first community pantry was set up in Maginhawa Street, Teacher’s Village in Quezon City.

The Nuñez family of Barangay Poblacion in Cordova town in Mactan Island called their community pantry the “Kusina sa Katawhan.”

Florenda Nuñez, the family’s liaison, said that the concept of the movement was to help those who were in need, especially during this time when the country was facing the coronavirus disease 2019 (COVID-19) pandemic.

Nuñez, who works in a cooperative, is also urging other people, who has extra goods or in any form, to donate so that they can help those who are in need.

“Initially, we put up 80 packs of three cups of rice, 80 packs of noodles, and 80 canned sardines,” Nuñez said.

She said that these food items were donated to them from the Facebook group “Taga Cordova,” where most of their members having already migrated to other countries.

She also urged the public not to abuse their community pantry.

She said that most of those who got food packs in their community pantry were trisikad drivers, who were greatly affected with the pandemic.

(In this time of the pandemic, it is a challenge for them to feed their families especially since only one passenger would be allowed for one trisikad.)

Nuñez said that she was also overwhelmed with the response that they received from the public.

She said that as of Monday, April 19, they were able to receive donations which consisted of 4 sacks of rice, 4 trays of eggs, and a box of noodles and canned goods.

Palace believes sprouting community pantries not a condemnation of gov’t