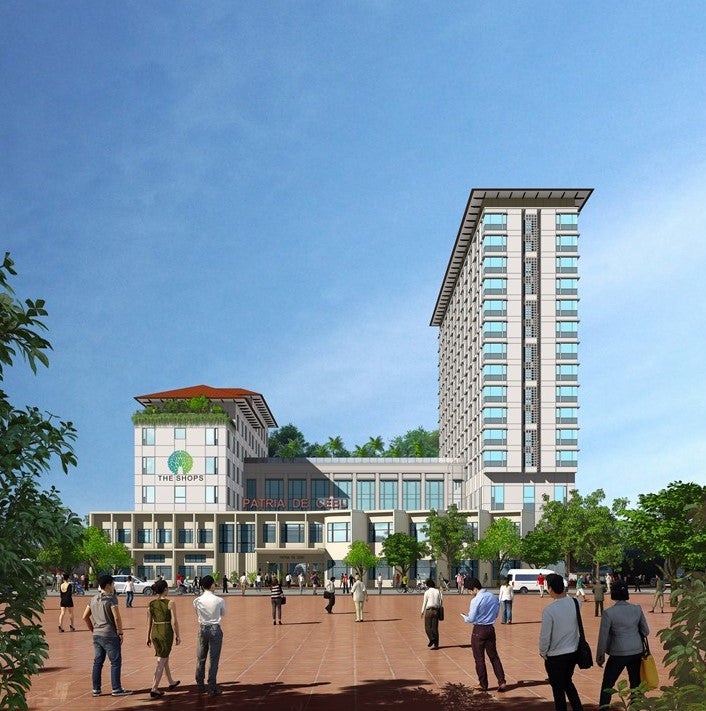 An artists’ impression of the new and redeveloped Patria de Cebu which broke ground on Monday, April 19. In compliance with orders from the National Historical Commission of the Philippines (NHCP), project proponents will be keeping the main and original Patria building. | Contributed photos. #CDNDigital

CEBU CITY, Philippines – Construction for the new Patria de Cebu will begin as it officially broke ground in time with the quincentennial celebrations of Christianity’s arrival here.

Developer Cebu Landmasters Inc. (CLI) and the Archdiocese of Cebu held on Monday, April 19 the ceremonial blessing and groundbreaking of the site where the redeveloped Patria de Cebu will soon rise.

The mixed-use development, with an area of 21,000 square meters, will be erected right behind the main and original Patria building, which was kept for heritage and historical purposes.

Patria de Cebu, located right in front of the centuries-old Cebu Metropolitan Cathedral, was built in 1954 as a youth recreational center and served as a convent for nuns.

CLI reported that Monday’s groundbreaking was made after the National Historical Commission of the Philippines (NHCP) approved their recent master plan that retained the old Patria building.

“The final design of Patria de Cebu is a result of collaboration between the Archdiocese of Cebu, CLI, and key stakeholders… And I am glad we are part of the quincentennial anniversary of the arrival of Christianity and have contributed to its significance,” said President and CEO Soberano.

Once completed, the new Patria de Cebu will be featuring dining, entertainment, office, and leisure components, particularly its 182-room hotel to be managed and operated by French multinational hospitality firm Accor.

Called Mecure Cebu Downtown, it is touted as the first international, luxury hotel to rise in downtown Cebu City.

Based on earlier reports, CLI is expected to spend around P1 billion for the redevelopment of the 50-year-old property.

On the other hand, the facelifting of the Patria will be at no cost to the Archdiocese of Cebu, and that the land where it will stand still belongs to the Roman Catholic church here, said Fr. Brian Brigoli, chairperson of the Cebu Archdiocesan Commission for the Cultural Heritage.

In a separate interview with reporters, Brigoli said they are aiming to complete the renovation being made inside the original Patria building before 2021 ends.

On the other hand, they are targeting to finish the patio of the new Patria within two years or in 2023, and other ‘vertical components’ of the property within three to four years.

“In the patio, we will be featuring the statue of the Blessed Virgin Mary because it is dedicated to the Immaculate Concepcion,” explained Brigoli.

The priest said they welcomed the agreement made between CLI and the Archdiocese to keep the old Patria, which was the subject of protests from heritage experts when the Soberano-led real estate developer announced in 2019 its plans to redevelop the property.

“When you see the new Patria, you will always be transported to its original visual integrity,” he added. /rcg