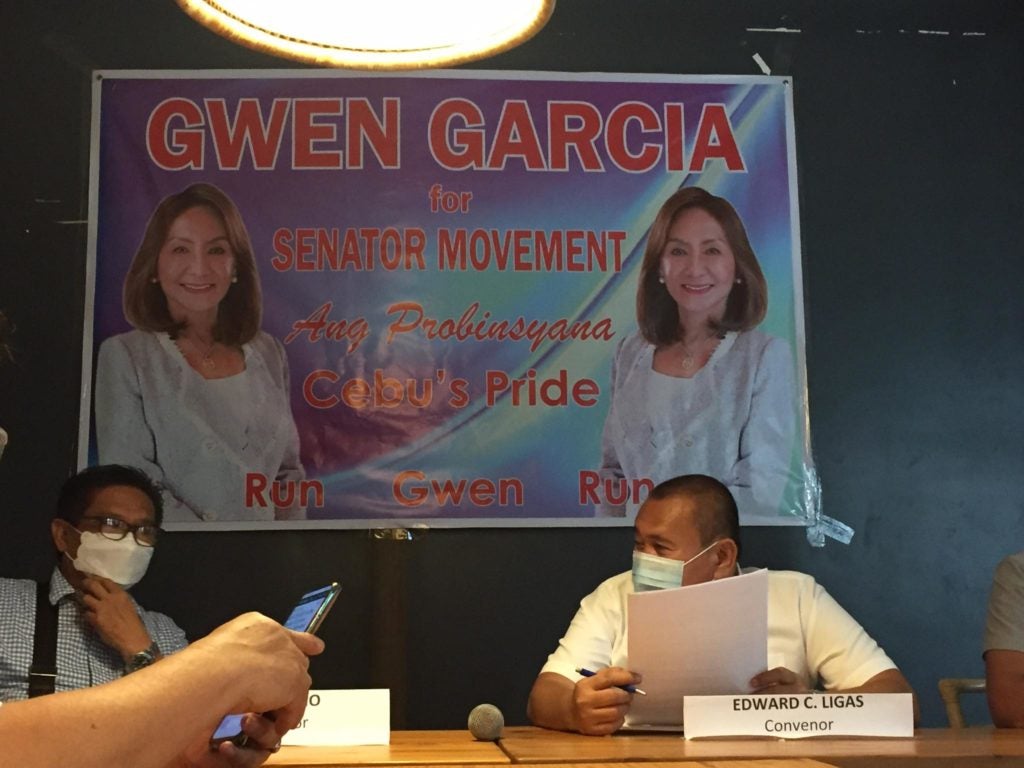 A group is pushing for Cebu Governor Gwendolyn Garcia to run for senator in the coming 2022 elections. | Futch Anthony Inso

CEBU CITY, Philippines — A multi-sectoral group in Cebu is urging Cebu Governor Gwendolyn Garcia to run as a senator in the upcoming presidential elections in May 2022.

Edward Ligas, Gwen for Senator Movement convenor, said that there would be a great possibility that Garcia would win as a senator in the upcoming elections, as he estimated that Cebu’s voting population had already reached 3 to 4 million.

(There is a big chance that Gwen will win. We have talked with a few operators on this. Why will she win? Cebu Province or Cebu itself have the largest number of voters in the Philippines. If you are a candidate for senator from Batangas, Cavite, then you will probably negotiate. Include me in Cebu province because I will include you in our areas.)

In their press statement, the group said that currently, there was no true-blooded Cebuano senator in the Senate. It added, that although Senate President Vicente Sotto III had traced his roots to Cebu, the senator no longer lived here.

For the group, Garcia has a long history of good governance as the first lady governor of the Province of Cebu and first congresswoman of Cebu’s third congressional district.

Ligas also clarified that the movement was a private initiative and that they had not coordinated with the governor on this.

He also believed that aside from Cebu, other provinces in Central Visayas would also support the governor such as Bohol, Siquijor, and Negros Oriental, and the rest of the Visayan speaking provinces.

WATCH: Secretary Dino’s reaction on bid to push Governor Garcia to run for a higher post

Neil Papas, another convenor of the movement, said that they were also hoping that the governor would meet them so that they could personally convince her.

Although several Cebuanos are against their movement and want the governor to stay in Cebu, Papas believes that such a great leader needs more opportunities so that she can expand the services that she can offer, especially to the Cebuanos.

(It will be better if we expand the services, we will let the leadership skills and ability of Governor Gwen to the national scale that it will not only be the Cebuanos who will benefit but also the whole country.)