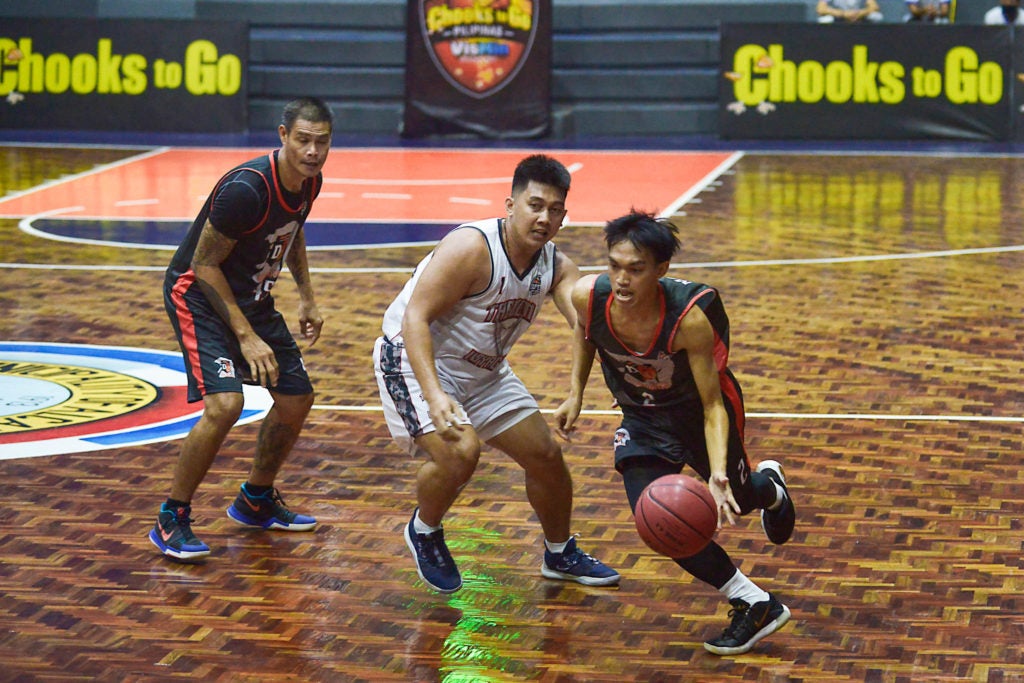 Jaybie Mantilla of the Dumaguete Warriors slips past Tabogon’s Almel Orquina during their game in the Pilipinas VisMin Super Cup. | Photo from VisMin Cup media bureau

CEBU CITY, Philippines — The Dumaguete Warriors outlasted the Tabogon Voyagers, 67-65, in overtime on Saturday night, May 1, 2021, to advance to a do-or-die match against the ARQ Builders Lapu-Lapu City Heroes in the ongoing Chooks-to-Go VisMin Super Cup at the Alcantara Civic Center in Alcantara town, southwest Cebu.

The thrilling battle was not just about the back-and-forth score but more on the physicality of the match that saw several players get battered and bruised.

But in the end, Dumaguete proved the steadier team to earn the right to face the higher-ranked Heroes tomorrow in the stepladder format of the competition.

The winner will then advance to the semifinals against the second-seeded KCS Computer Specialists-Mandaue City.

The game was tied at 59-all at the end of regulation.

With a minute and a half remaining in overtime and with the score tied at 63-all, Ronald Roy of the Warriors sank a crucial triple from the right wing to give his team a slim, 66-63 lead. The Voyagers then pulled to within one, 65-66, after Jethro Sombero and Harold Arboleda split their charity shots.

The Voyagers even had a shot at taking the lead but guard Joemari Lacastesantos committed a costly blunder, calling a timeout when they had none, resulting in a technical foul being called against them.

The Warriors’ Jaybie Mantilla then converted his free-throw to extend Dumaguete’s lead to two, 67-65, time down to just seven seconds. The Voyagers still had an opportunity to win the game but Arboleda badly missed a three-pointer while Arvie Bringas airballed his fadeaway jumper as time expired.

Mantilla, Roy, and Mark Doligon all had double-double performances in the league’s very first overtime match. Mantilla came away with 24 points, 12 rebounds, three assists, and four steals while Doligon added 17 markers, 10 boards, two dimes, a steal, and a block.

The loss spoiled the monster game of Bringas who had 18 points and 21 rebounds. Lacastesantos added 10 points, nine boards, seven assists, and three steals.