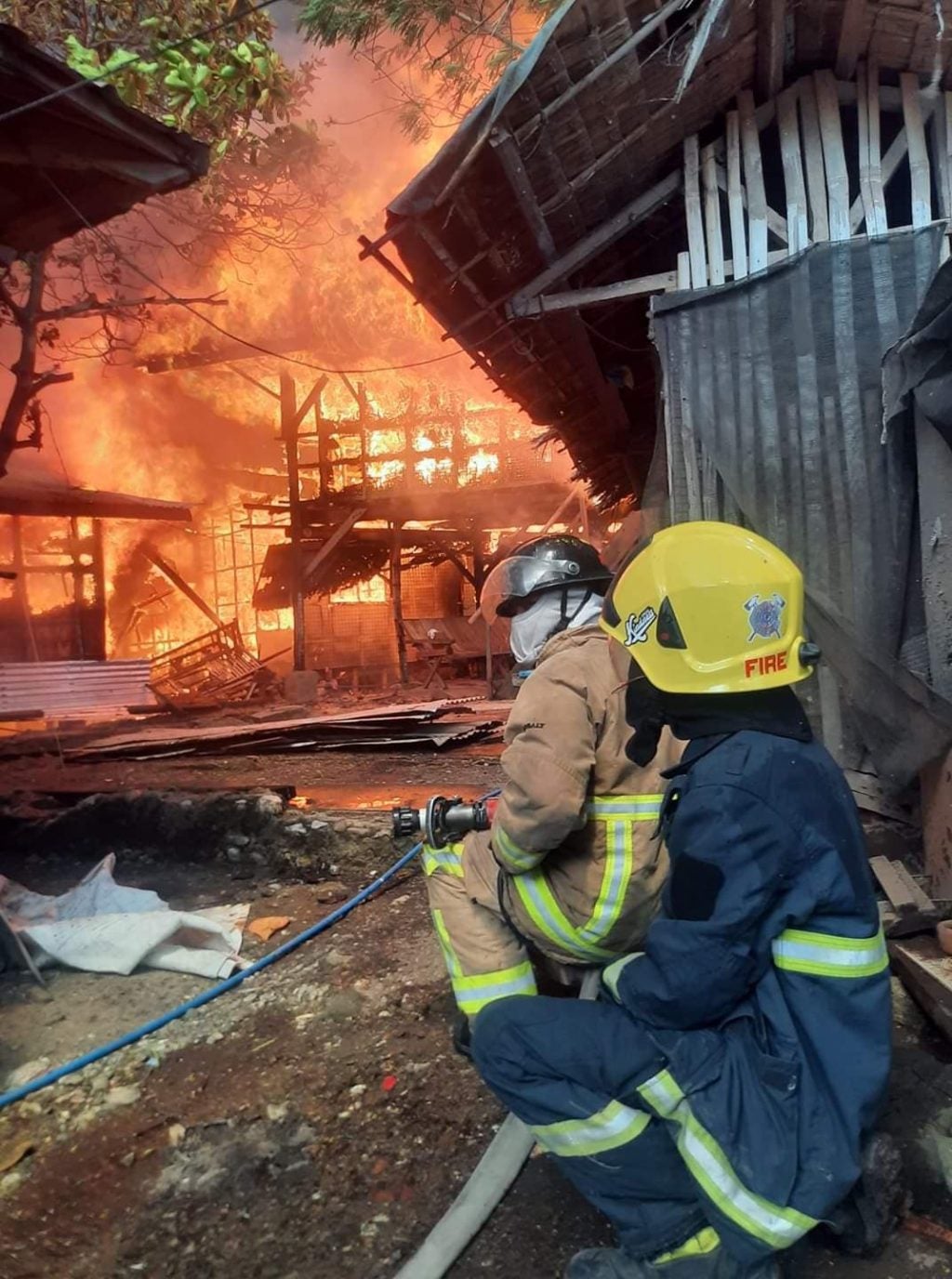 Firefighters prepare to battle the fire. This was at the height of the fire that hit Sitio Sitio Seaside Alumnos, Barangay Basak San Nicolas, Cebu City, today, May 9. | Photo by Paul Lauro

CEBU CITY,  Philippines — Nearly P2 million worth of properties went up in smoke and at least 100 houses or initially at least 500 individuals were displaced after 3 fires hit Cebu City in a span of around 10 hours on Mother’s Day, today, May 9.

Two of those fires hit Barangay Basak San Nicolas in a span of nearly 7 hours — the second fire, which struck at past 12 p.m., razed dozens of houses and displaced an estimated 100 households in Sitio Seaside Alumnos.

According to the Cebu City Social Welfare Services office, an initial 113 households were displaced.

Elaine Gabutan of the  CSWS said that as of 5 p.m. there were initially 549 individuals that they had recorded who were displaced by the afternoon fire.

She said that their recording of how many fire victims were still ongoing.

According to a barangay official of Barangay Basak San Nicolas, the displaced families from the Sitio Seaside Alumnos fire were temporarily staying at a school in the barangay.

For the first fire incident, it happened at past 6 a.m. in Caimito Street also in Barangay Basak San Nicolas.

Fire investigators estimated the damage to property on that early morning fire at P700,000 with 2 houses razed and 3 others gutted.

For the second fire incident at past noon, Fire Officer (FO2) Fulbert Navarro, Cebu City Fire Department’s investigator, said that they estimated the damage to property of the Sitio Seaside Alumnos fire at P1.2 million.

Navarro said that they were still investigating the cause of the fire.

He said that they were verifying two witnesses accounts of two relatives.

(The first version was from Teodomiro Echevarria and the other one is from Andresa Echevarria. We are still verifying these witnesses’ accounts.)

Andresa told Navarro that the fire did not start from her house but from Teodomiro’s house.

(The fire started at the roof of my uncle’s house. Our houses are just close by. My child saw that the electric wire from my uncle’s house was on fire. The wire connected to the roof.)

Navarro said that they had yet to verify these statement from Andresa.

He also said that no one was injured in the Sitio Seaside Alumnos fire and that there were challenges in getting to the fire site.

Navarro said that the pathways leading to the fire site was narrow and they had to connect seven fire hoses to reach the fire site.

He said that they received the call about the fire and responded to it at 12:50 p.m. and it was placed under control at 1:52 p.m.

Initial reports from the Cebu City Fire Department showed that the fire was reported at past 4 p.m. and it was under control a minutes later.

The fire department also initially said that the fire gutted a two-story house in the area.

LOOK: Images of the aftermath of the Sitio Seaside Alumnos Fire