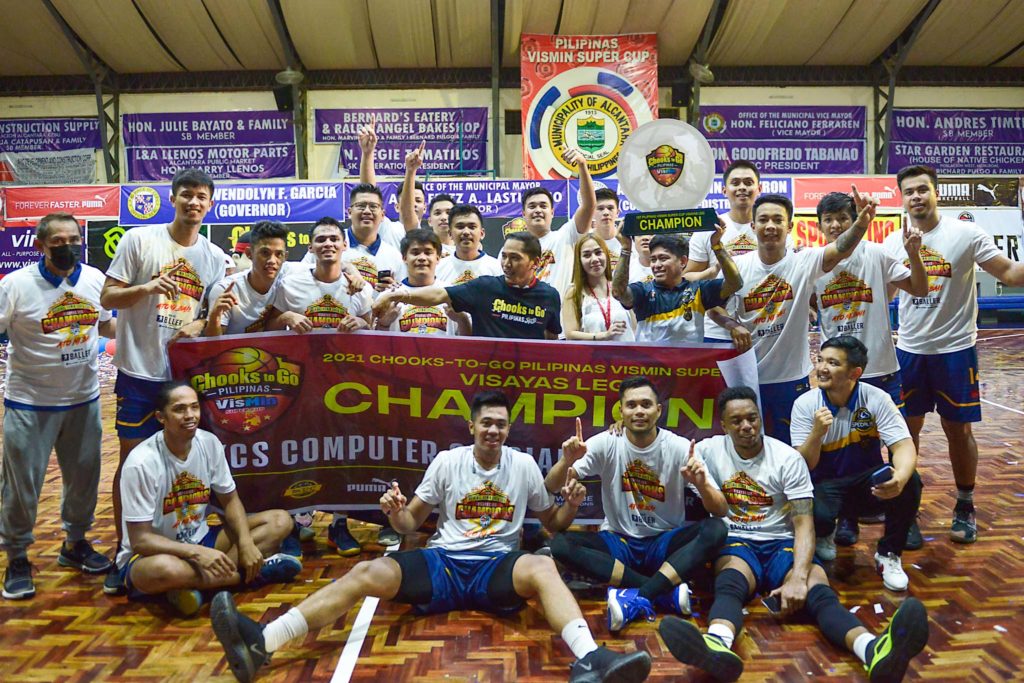 CEBU CITY, Philippines— They came in as underdogs with their backs against the wall, but the KCS Computer Specialists Mandaue City toppled the once invincible MJAS Zenith Talisay City Aquastars to walk away as the Visayas leg champions of the Chooks-to-Go Pilipinas VisMin Super Cup on Sunday evening, May 9, 2021.

The Specialists finished their Best-of-Three Finals Series with the heavily-favored Aquastars with a 2-1 win-loss slate at the Alcantara Civic Center in Alcantara town, southwest Cebu.

They stunned the Aquastars with an 89-75 final score in the Do-or-Die game three, bagged the P500,000 purse and the ticket to the grand finals later this year, where they will face the Mindanao leg champion.

There are sorts of rare feats in the unprecedented win for the Specialists as veteran coach Mike Reyes won two titles from two separate teams within 20 months after he led the Southwestern University-Phinma Cobras to the Cesafi Men’s basketball title in November of 2019, beating the University of the Visayas Green Lancers.

Also, it was a very special moment for veteran guard and the league’s eventual finals MVP, Ping Exciminiano, who won his first title and first MVP plum in his pro career.

However, the Specialists did not easily win the deciding game three as the Aquastars also gave their all. The Aquastars managed to seal the first half with a five-point lead, 39-34.

However, the Specialists turned the tables in the third quarter after they uncorked an incredible 18-1 run capped by a three-pointer by Shaquille Imperial that gave them a 54-44 lead. Bernie Bregondo sparked the turnaround with six straight points inside.

Al Francis Tamsi, Red Cachuela, Michole Sorela, and Ping Exciminiano then got in on the act, with the latter draining a buzzer-beating triple at the end of the third period to put the underdog KCS Mandaue in front by 11, 61-50.

The Specialists then poured it on in the fourth quarter with diminutive guard Gileant Delator, at one point, scoring eight straight to give them an 81-64 lead.

Sorela then drilled in a long three-pointer and a baseline jumper to give the underdog KCS Mandaue their biggest lead of the game at 22, 88-66.

Conversely, the Aquastars could not get anything going with sixth man Darrell Menina getting ejected from the game after incurring a flagrant foul on Delator with 5:17 left in the game.

“I told them, ‘let’s try to make history. Let’s give them 40 minutes of hell!’” said KCS head coach Mike Reyes.

The Specialists’ championship run was made even more remarkable because it came at the expense of Talisay City— a team that went unbeaten in the 10-game elimination round, which included a pair of wins over them.

(I am truly blessed. After what happened to me where I got injured and it was an Achilles injury, I am grateful that I am in this situation.)

Sorela and Tamsi added 12 markers apiece, with the former hauling down 8 boards while Delator and Imperial chipped in 10 markers apiece.

“I got to win the hearts of the players. That’s why they played so hard because I think I was able to capture it,” said Reyes.

And that they did as they kept Talisay’s team captain, Paulo Hubalde, in check all game long. Hubalde managed just four points and committed a whopping five turnovers.

Season MVP Jaymar Gimpayan finished with 12 points, most of which came when the result was hardly doubtful.

The Aquastars, on the other hand, did not go empty-handed after they pocketed P100,000 as the runners-up of the tournament.