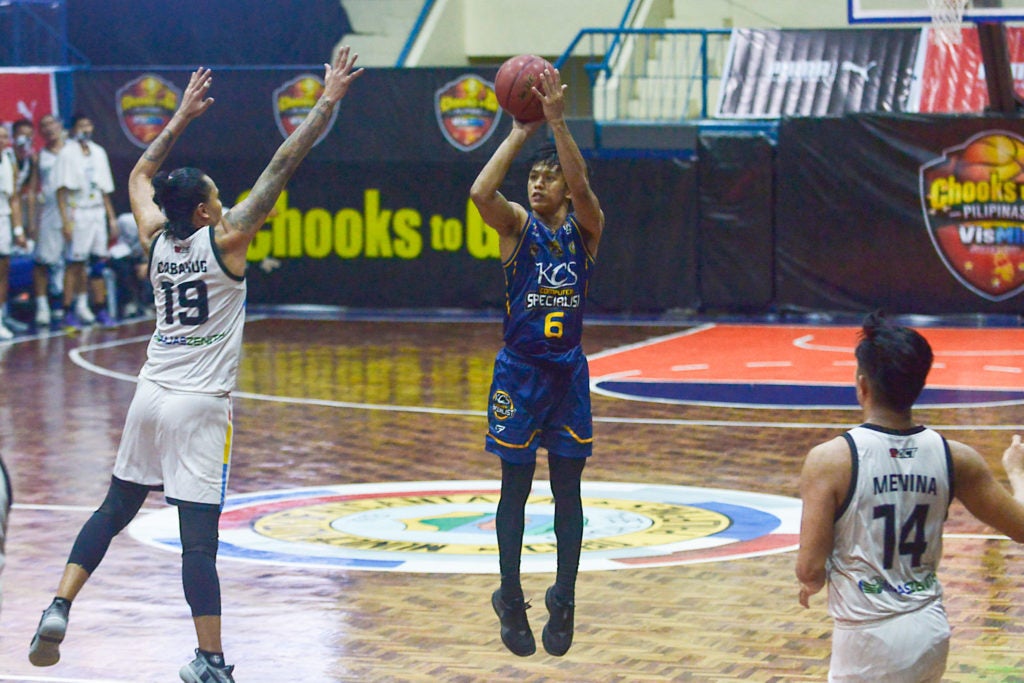 Shaq Imperial shoots a triple that went in to give the KCS Computer Specialists-Mandaue City the stunning, 67-66 victory in Game 1 of the Best-of-Three Finals Series of the Chooks-to-Go Pilipinas VisMin Super Cup. | Photo from VisMin Cup Media Bureau

CEBU CITY, Philippines — From allegations of game-fixing to the suspension of players to the imposition of hefty fines and the banning of a team from the league, one can say that indeed, strange things are happening in the VisMin Super Cup.

Add to that the stunning loss of the erstwhile unbeaten and overwhelming title favorite MJAS-Zenith Talisay City Aquastars to the KCS Computer Specialists-Mandaue City earlier tonight, May 7, 2021, and one can say that not only strange things are happening in the league, but crazy things as well.

The Computer Specialists outlasted the Aquastars, 67-66, in what is by far the most stunning reversal of the entire league, to draw first blood in their Best-of-Three Finals Series played at the Alcantara Civic Center in Alcantara, southwest Cebu.

Making their victory more special is the fact that Mandaue City won the game on the eve of the city’s fiesta celebration in honor of their patron saint, Saint Joseph the Worker.

And work hard the Specialists did.

Shaquille Imperial powered the Specialists’ offensive urn by tallying 16 markers including the dagger three that gave his team the one-point lead. He also had four rebounds, and two assists in the tooth-and-nail match.

Imperial canned the dagger three with 40 seconds left to rescue his team after the Aquastars erased their 11-point cushion and tied the game at 62-all in the final period.

In fact, the Aquastars managed to grab the lead in the final three minutes of the game after Darrel Shane Menina made both his free throws, 66-64.

The Specialists were desperate to score as time winded down. With Talisay up by two, Imperial attempted a triple that missed, got the rebound but missed a short jumper.

His confidence unshaken, the former Cesafi men’s basketball finals MVP of the Southwestern University-Phinma Cobras got the ball back after an offensive rebound by Michole Sorela and sank the triple that pegged the final tally, 67-66.

The Aquastars’ big man Jhaymo Eguilos could have given his team a win or force overtime but he cracked under pressure by missing two crucial free throws with less than a minute to go.

Imperial’s SWU teammate Dyll Roncal then secured the rebound to give their team a crucial possession with 32 seconds left. They tried to score but Sorela and Bernie Bregondo both missed their attempts.

The newly-crowed Visayas leg MVP Jaymar Gimpayan grabbed the rebound with six seconds to go, but even the tournament’s best player committed a costly error after he failed to call for a timeout which could’ve reset their possession in a more favorable situation.

The Aquastars’ team captain, Paulo Hubalde tried to heave a Hail Mary that hit nothing but air and watched in horror as time expired.

“He always comes up big when his number is called,” said the Specialists’ assistant coach Vince Urot, referring to Imperial. “We all know him from his CESAFI days. He is not afraid to take those big shots in the grandest stage.”

Gryann Mendoza, one of the Visayas’ leg’s Mythical Five chipped in 15 points for the Specialists along with three boards, an assist, a block, and a steal. Ping Exciminiano added 10 points, five rebounds, four assists, and three steals on top of playing incredible defense on Talisay’s cadre of perimeter threats.

The game saw nine lead changes, and six deadlocks as both teams did not let each other get an inch of leeway.

The Specialists banked on their signature defense which forced the Aquastars to their lowest output in the entire tournament.

It was the Aquastars’ first loss after sweeping the elimination round, 10-0 which gave them an automatic berth to the finals and four days of rest. The Specialists, on the other hand, toiled laboriously in the stepladder matches and earned the right to face Talisay City just last Wednesday night.

Game 2 will be played tomorrow, Saturday, May 8 at 7 p.m. on a day when Mandaue City celebrates its annual fiesta.

Will it be a double celebration for the Computer Specialists or will the Aquastars rain on their parade?

Read Next
Carpio rejects debate with Roque on ‘pointless’ issues