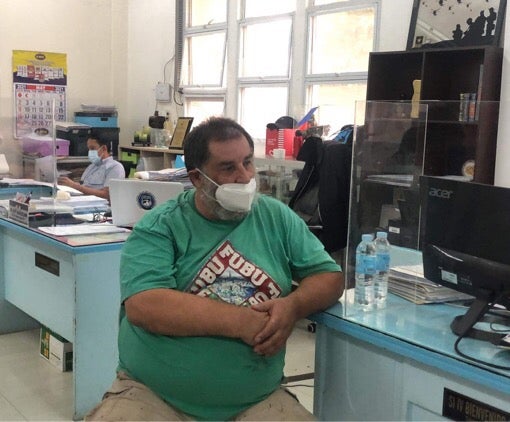 A photo of Steve Hidosan a few hours after he was arrested by NBI-7 agents on Wednesday morning, May 19, in Barangay Canamucan in Compostela town. | via Pegeen Maisie Sararana

CEBU CITY, Philippines — A foreign national long wanted for qualified child prostitution, sexual abuse, and human trafficking was arrested on Wednesday morning, May 19, by agents of the National Bureau of Investigation (NBI-7) in Barangay Canamucan in Compostela town, northern Cebu.

The foreigner was identified as Steve Hidosan, who claims to have come from Yugoslavia, a former country in southeastern Europe. He was alleged to have been hiding from authorities for eight years now.

NBI-7 director, Attorney Renan Oliva, said that NBI agents under the Anti-Organized Crime Division based in Manila coordinated with them upon receiving information that Hidosan was residing in Compostela town with his Filipino live-in partner and two children.

The warrant of arrest that they served earlier was issued by Judge Bernardita Gabitann-Erum of the Regional Trial Court, Branch 61, of Angeles City, last January 14, 2013.

Agent Cesar Rivera of NBI Manila, the investigator in charge of the case, said that the numerous counts stated in the warrant reflect the frequency of the suspect’s violations.

Rivera said the violations were all committed in Angeles City, Pampanga.

Rivera added that Hidosan needs to pay a bail of P200,000 for every violation of RA 7610 that he committed or a total of P1.4 million while the offenses he committed under RA 9208 mean life in prison or Reclusion Perpetua for the foreigner.

NBI-7 agent Aga Gierran told reporters that around 5 a.m. today, they went to Barangay Canamucan in Compostela to arrest Hidosan. The suspect reportedly did not resist when collared by the arresting officers.

Gierran said they have to use a drone to confirm the suspect’s presence inside his residence since his house was fenced and closed.

When the suspect was asked to present necessary documents to prove the legality of his stay in the country, Gierran said the former failed to show them anything, not even a passport.

Hidosan, for his part, said that he has no knowledge about the cases and that he was living peacefully with his 29-year-old Filipina live-in-partner and their two children.

He also claimed that he was a K9 unit trainer for both the Philippine National Police and the Philippine Drug Enforcement Agency. Apart from that, he also breeds high-quality fighting cocks for derbies which costs P20,000 each.

Oliva added that once convicted, Hidosan needs to serve time for the crimes he committed.  After serving time, he will face deportation proceedings.

Oliva also appealed to the residents of Compostela town and neighboring municipalities to report to their office if they have similar complaints against the suspect.

“We do not know if what he did in Angeles, he is also doing here [in Cebu]. You should file a complaint in NBI para maimbestigahan natin siya. We can add additional cases if similar acts have been committed by him dito sa lugar nato,” Oliva said.  /rcg

Read Next
DOH-7: Vax not directly linked to deaths of 3 frontliners