Photo taken during the deliberation of the Regional Oversight Committee in Barangay Drug Clearing on Friday, May 21. | Photo from Jonah John Rodriguez

CEBU CITY, Philippines — Barangays that were declared drug-cleared in Central Visayas can be reverted from their status once barangay officials and the community cease from taking actions in maintaining their status.

With 14 barangays in Central Visayas declared drug-cleared on Friday, May 20, the Philippine Drug Enforcement Agency (PDEA-7) which is the chairman of the Regional Oversight Committee in Barangay Drug Clearing, reminds all barangays that even if the status has been declared to them, the barangay has to sustain their efforts against the illegal drug activities in their localities.

On Friday, two barangays from Cebu City, 11 from Cebu province, and one from Bohol province were approved by the committee as drug-cleared barangays.

Considered a major accomplishment not only in their agency, Leia Albiar, PDEA spokesperson said that this does not mean that the local police and their personnel will no longer conduct drug operations in these areas. She said that such operations will continue if they receive reports that there are active drug personalities in the area.

(If there are new drug personalities, the ROCBC will convene to make a resolution and inform the barangay about the presence of drug personalities, we will take action against this. So, we will go back to house visitation, encouraging surrenderees to enroll in applicable intervention. If you are a user, you take a community-based rehab program, if you are a pusher, you’ll go to Balay Silangan.)

Balay Silangan is an initiative from PDEA that serves as a temporary refuge while assisting drug personalities to be law-abiding citizens.

Here is the list of the 14 barangays in Central Visayas that were declared drug-cleared by the Regional Oversight Committee in Barangay Drug Clearing (ROCBDC). 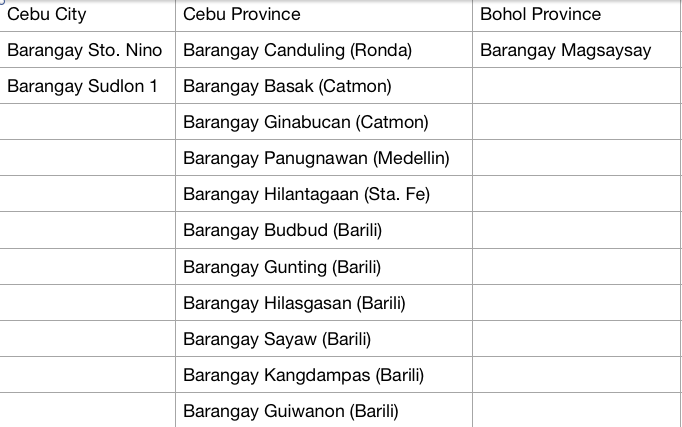 If the barangay takes prompt action against this and the drug personality surrenders and enrolls in an intervention, their status will not be revoked, Albiar said. However, if the barangay captain refuses to participate in the required action, there is a possibility that their drug-cleared status will be reverted.

Albiar added that in the regulation, the barangay will be given 30 days grace period for them to take action.

( I doubt if there is a barangay that will allow their status to be reverted. They need to sustain it because what they have been through was not easy, their sacrifices in processing the necessary documents, in assisting us from PDEA and PNP when conducting house visits.)

She added that if they clear a barangay from drugs, it affects not only the community but also the hundreds and thousands of communities. This is a big accomplishment not only for PDEA but also for the anti-drugs campaign.

Quoting what the regional director Levi Ortiz has told her, Albiar said that Cebu City is the center of gravity in Region 7. Given that there are already two barangays cleared in Cebu City, Albiar notes that this surely is an accomplishment.