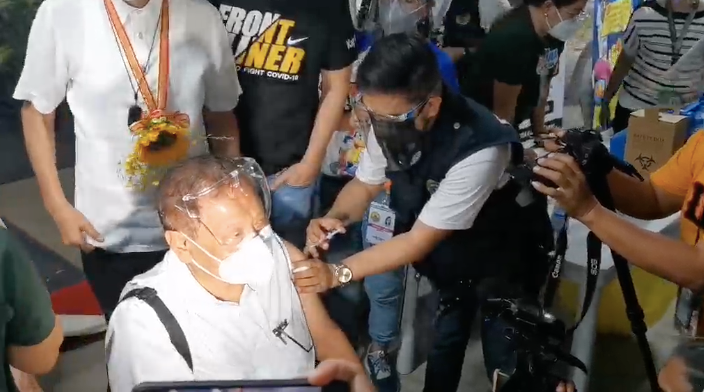 Photo taken during the ceremonial rollout of Pfizer-BioNTech vaccines in Cebu City held at the University of Cebu (UC) – Senior High campus on May 17, 2021. | Photos courtesy of Radyo Pilipinas – Cebu

CEBU CITY, Philippines — The Cebu City government is now running low on its supply of the sought-after Pfizer vaccine.

The city’s Vaccination Operations Center is expected to complete the distribution of available vaccines by Thursday, May 27, with at least 1,700 doses left as of Wednesday, May 26.

Dr. Jeffrey Ibones, officer-in-charge of the City Health Department (CHD), said in a phone interview that they will focus on the distribution of AstraZeneca doses in the next two weeks and after they consume their supply of Pfizer vaccines.

While the city’s supply of Pfizer vaccines are running low, its AstraZeneca vaccines are still expected to last for a week or two.

The city still has around 15,000 doses of AstraZeneca vaccines for its A2, A3, and A4 priority groups.

Ibones said that as soon as they consume their Pfizer supply, they will use the vaccination center located at the University of Cebu (UC) campus in Barangay Sambag I to either accommodate those who are already scheduled for their second dose or for those who are scheduled to get their first AstraZeneca or Sinovac jabs.

As of today, at least 17,000 workers have already registered for the A4 priority group in Cebu City.

(We are urging workers to preregister, whether they are Cebu City residents or not, for as long as their workplaces are located in the city.)

Meanwhile, Ibones clarified reports that the Pfizer vaccines are being distributed to influential individuals or rich families in the city saying that these were randomly distributed to those who preregistered and are already listed on their system as among those qualified for the city’s vaccination program.

(That is not the case because if that were true, all members of a particular family could have been given Pfizer.  Instead, one family members gets a Pfizer jab while the other gets AstraZeneca.  They are randomly selected in our system.)

Ibones said the city’s policy not to allow vaccinees to choose their preferred brand stays.  After they are told of the vaccine that they are to receive, they are asked if they intend to continue with their jab or not. / dcb