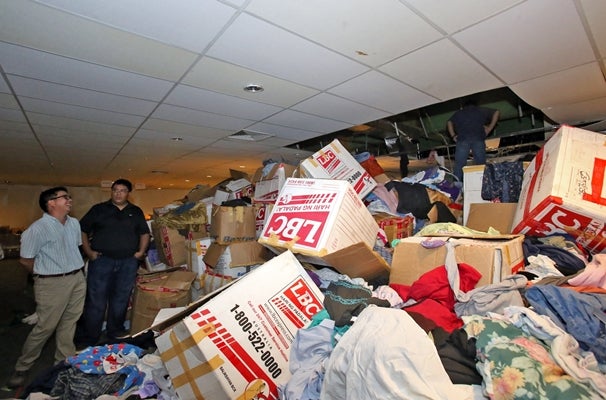 A LARGE hole in the ceiling of Gawad Kalinga’s (GK) storage area in the basement of the Cebu International Convention Center (CICC) offers a clue of how their relief goods could have been stolen.

Several ceiling panels had been removed, a gap large enough for perpetrators to climb down from the ceiling, said GK Cebu province head Antonio “Toby” Florendo.

In a joint press conference yesterday with Capitol officials at the site, Florendo said GK is pursuing its own investigation into the “ransacking” of sealed boxes of used clothing and other relief goods, and has “cleared” their volunters from any doubts that they participated in the theft.

He said GK continues to “explore all angles” in the case amid initial reports that the theft was an “inside job”.

Capitol chief security officer Loy Madrigal had earlier released footage of the facility’s closed-circuit television (CCTV) camera showing a group of men hauling out boxes from the hall in the evening of June 18, and said the burglars may have had inside information about the combination number of the padlock sealing the hall’s door.

However, Florendo said most of the signs in the “crime scene” point to the “ransacking” of their storage facility on site.

“If you look at it now, the storage area is a mess. When we received the goods, we sorted them out, put them in boxes and sealed them,” he told reporters.

“It seems like there was a ransacking in our storage facility. In fact, you can see that there’s a hole and there are boxes inside the roof. So we are looking at all angles until we complete our investigation,” he said.

Florendo and other GK members opened the storage room and gave updates to the media about their separate investigation.

The briefing was the second time the non-government organization (NGO) spoke about the incident after releasing a short statement last July 24.

GK at the time confirmed that “the entry into the GK storage area in CICC on June 18, 2014 and the withdrawal of goods on said date were unauthorized.”

Florendo said they cannot inventory all the items in the CICC facility since these would still be used as evidence.

It would also be difficult to identify the number of stolen goods since the clothes and other items were scattered all over the room, he said.

Yesterday, Florendo showed to reporters a large hole in the ceiling big enough for several adults to crawl in and out of.

He said the ceiling only had one damaged plank a few months back but was a much bigger gap.
Withdrawals

An empty box was found in the crawl space near the hole.

Florendo said the boxes appear to have been forced open contrary to the June 18 footage showing men hauling out boxes that were still sealed.

He said GK is asking the provincial government security office to provide CCTV footage for days recorded before June 18.

With this, he said their seven-man investigation team can reconcile the information on the date of their authorized withdrawals from the storage room and the video.

“There is also a possibility that the persons in the video are GK representatives making authorized withdrawals of stocks,” Florendo said.

Madrigal said the June 18 looting was “suspicious” since it was carried out from 7 p.m. to 12 midnight.

“We reviewed the other footage and usually, they were hauling out goods in the morning, not at night. That’s why it was suspicious for me,” Madrigal said.

But when he showed the footage to security guards, watchers and janitors on duty at the facility in June, “no one was familiar with the people on the video,” Madrigal said.

Florendo said GK members who were in-charge of the storage room and had access to the area are “definitely above suspicion and cleared” from the incident.

He said the clothes and other relief items arrived last May, six months after supertyphoon “Yolanda” hit northern Cebu.

He said the organization didn’t see any “immediate need” to distribute all the clothes. The canned goods were expired or dented, he said.

“Clothes are very difficult to give out. How do you give them, how do you sort them, male, female, adult or child? It’s very difficult. In fact, we’ve had a lot of meetings to sort out the clothes,” he said.

Burglars get relief goods in CICC: An inside job?

Read Next
Mangroves in Balili to replace 79 missing trees in Osmeña St.