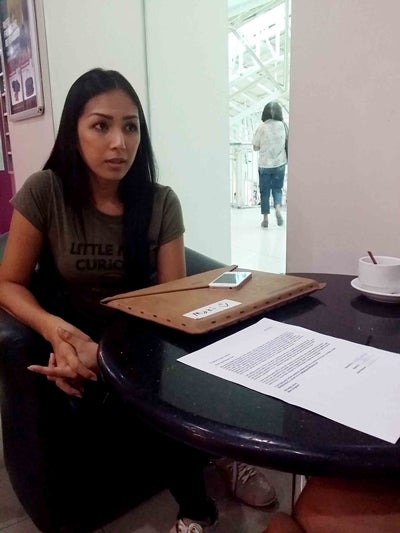 Maki Gingoyon gave a formal letter of complaint against Fitness First for not allowing trans-woman to use the ladies’ room (CDN PHOTO/ MARIAN Z. CODILLA)

Maki Gingoyon, the 25-year-old transgender who wasn’t allowed to use the ladies’ locker of a mall gym, isn’t interested to sue just yet.

“I still don’t have a plan to file a case against Fitness First,” said Maki after handing a letter-complaint to the commercial gym in Ayala Center and talking with the manager.

“For now, I am not filing a case because the ordinance is still not fully implemented,” said Maki.

“I’m still waiting for the response of the management and I’ll ask advice of the LGBT (lesbians, gays, bisexuals and transgender) community.”

Maki, a a former Queen of Cebu 2010 titlist, is using the experience instead to raise awareness about the rights of transgender women.

A selfie of Maki posted on Facebook encourages the LGBT community and the public to post their own photos on oline with the statement: “My genitalia has nothing to do with my gender identity.”

“Let us not be harsh yet. Let us take this situation as an opportunity to educate our community about transgender women and diversity,” said the former psychology student.

When Fitness First attendants noticed that Maki’s ID card said “M” for male, they asked if the applicant had already undergone a sex change operation.

Maki at first said “yes”, then admitted that his private organs were still intact.

The gym explained that Maki would have to use the men’s locker room if he signed up for membership.

The probing questions, although asked politely, were “humiliating” said Maki later in a Facebook post that has generated varied reactions online, from messages of support to scathing put downs.

Some anonymous Facebook users questioned Maki’s insistence to use the ladies locker room, saying “he is still a guy cause he still has male genitalia.”

Supporters, meanwhile, flooded Maki’s Facebook wall with their photos and the suggested slogan “My genitalia has nothing to do with my gender identity.”/by Kristal A. Eduyan Palompon Institute of Technology Intern, with Correspondent Apple Mae Ta-as