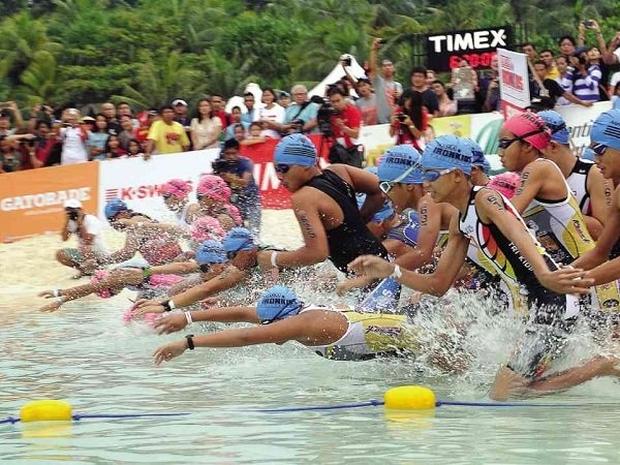 With some of last year’s divisions cancelled due to inclement weather, this year’s Ironkids participants pray for sunny weather this Saturday. (CDN FILE PHOTO)

Junior triathletes participating in the Alaska Ironkids on Saturday as well as their parents are praying for a sunny weather this weekend to avoid any complication come race day.

Last year, organizers were forced to cancel the 8-under and 9-10 years old divisions because of heavy rains before the start of the race.

The move met some criticism from some of the kids’ parents, particularly those from out of town. But organizers stood firm on their decision, noting that the kids’ safety was top priority.

Ronna Priagula, mother of junior triathletes Issa and Yasmin Priagula, said the safety of the children should always come first.

“I hope the organizers will not sacrifice the safety of our children. If they want to cancel it [because of bad weather], then it’s okay for us,” she said. Still, she is hoping that everything turns out well this weekend so that her children will have a chance to finish the race and achieve something.  “Let’s just pray for fine weather.”

Ivy So, mother of Sacred Heart School-Ateneo de Cebu’s Ralph Eduard and Russell So, is also hoping for good weather on Saturday because her children have trained hard for the race.

“They’ve been through tough training so I hope they won’t get disappointed this Saturday,” Ivy said.

Another parent, Millette Chiongbian, is confident that organizers will handle the situation better in case the weather turns bad.

“I’m sure [the organizers] are more prepared for this year,” said Millette, mother of the vaunted Chiongbian siblings Yuan and Savannah. “For sure, they will have options for the participants in case there’s really bad weather.”

Meanwhile, a father of one of the participants who asked not to be named offered an unsolicited advice to the organizers in case the same scenario happens again.

“There are more options aside from cancelling. They can divert the race course,” he said.

He explained that organizers could have excluded the bike leg and turned the event into an aquathlon to give kids who trained for months, especially those from outside Cebu, a chance to compete. “But we can’t blame them (organizers). Maybe they prioritize the safety of the kids rather than the race. I just hope and pray that it will be sunny on Saturday.”

In a related development, Justin Chiongbian, who placed second to Filipino-German Arno Baetz last year in the tightly contested 13-14 bracket, won’t be joining this year.

His mother, Millette, said Justin will be competing in this weekend’s Milo Little Olympics Visayas Regional Finals at the Cebu City Sports Center.

Shia Ruth Uy of Dipolog City will be defending her 13-14 girls’ title in the Ironkids and will also join Justin after the race to represent SHS-AdC in the Milo Little Olympics.