CEBU CITY, Philippines — Cebu City Acting Mayor Michael Rama has issued a memorandum to explain to a private contractor managing the Barangay Inayawan transfer station over alleged failure to comply to portions of the contracts with the city.

In a letter sent on June 29, 2021, Rama asked DOCAST Construction to explain why some portions of the P400 million worth contract awarded to them was not complied with, especially the provision stating that the contractor must have a transfer station at the North and South Districts.

Rama specified in the letter that DOCAST does not have a North District transfer station in contrary to the stipulated provisions.

Furthermore, DOCAST was supposed to be able to provide a weight determination facility or weighing bridge that is certified by the Department of Science and Technology and calibrated by the manufacturer. The weighing facility must be manned by Department of Public Services (DPS) personnel as well.

However, Rama said there is no proper monitoring as to how much garbage is being disposed in the landfill due to the absence of a proper person to monitor the weighing process both at the transfer station and at Binaliw landfill.

The acting mayor pointed out that the contractor must have a minimum of 50 trucks, but DOCAST only has 13 trucks to haul the garbage.

Finally, Rama is concerned that DOCAST is under fire for allegedly failing to pay its financial obligations to ARN Central Waste Management of the Binaliw Landfill, causing them to refuse entry to DOCAST trucks.

Rama has given the company 48 hours to explain their side in the issue upon receipt. 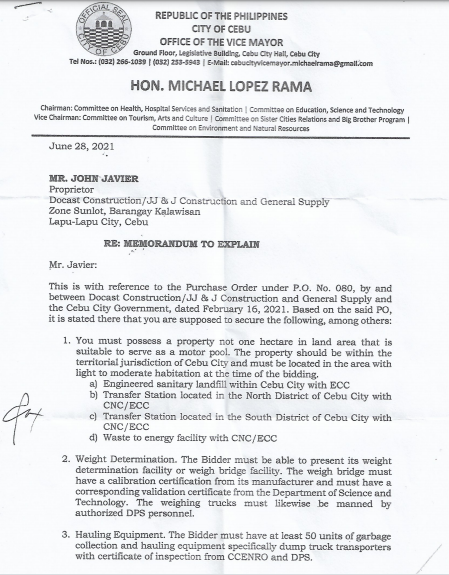 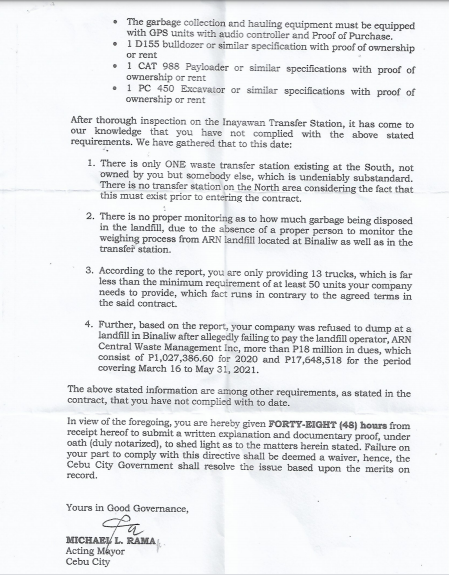 “This is a serious memorandum. Now my mayorship is only until June 30. It will now be up to Mayor Edgardo Labella when he comes back what he will do,” said the acting mayor.

Rama said that there is a chance for the city to terminate its contract with DOCAST if it can be proven that they have failed to comply with the contract with Cebu City.

However, he assured that the city will go through the process, including tackling the issue at the Cebu City Council. The council is set to tackle the issue in a special session on Wednesday, June 30.

CDN Digital has reached out to DOCAST, but the company has yet to respond as of time of writing.

Rama said that should the city terminate its contract with DOCAST, the public need not worry as the funds are enough for the city to manage its own garbage for some time.

Read Next
Duterte unaware, not consulted on Pacquiao taking over PDP-Laban presidency