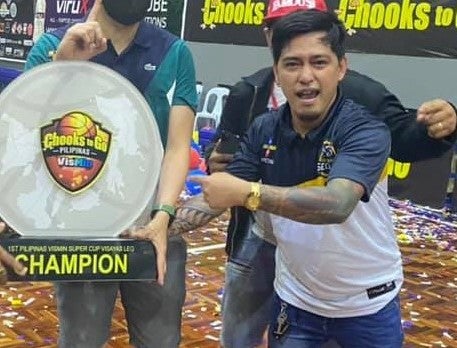 CEBU CITY, Philippines—After winning the war on the hardcourt, the reigning Visayas champion of the Chooks-to-Go Pilipinas VisMin Super Cup KCS Computer Specialists-Mandaue is facing another tough battle off the court.

Team owner Ricky Verdida said the team is facing some financial issues that may affect the performance of the team once they get back on the hardcourt.

The Specialists topped the Visayas leg last May and are set to face the champion of the Mindanao leg for the inaugural overall crown of the league. The Mindanao leg is set to start on July 2, 2021.

Verdida explained that the team also lacks conditioning due to the delayed tip-off of the Mindanao leg and it doesn’t help that they’re not able to practice right away due to these financial concerns.

(Our main concern is the financial aspect of the team.)

This is why Verdida, in a Facebook post, pleaded for help as he tried to get his team in tip-top shape in time for the National Finals.

In the post, he said the local government unit of Mandaue City has yet to give the team financial support. But he did mention that a city councilor, whom he didn’t name, gave a little for the team.

(Aside from the salaries, we need food during practice, and their housing. So it’s really expensive. We are looking now for sponsors because we really need a lot.)

The team is looking at the Aznar Coliseum of the Southwestern University-Phinma or the Ibabao-Estancia Multi-purpose gym in Mandaue City as their training camp’s venue.

(I am very hopeful that someone will approach us and help the team financially.)

The City of Canlaon in Negros Oriental reached out to Verdida and signified its intention to help the Specialists in the upcoming National Finals.

But VisMin league officials explained that the LGU of Canlaon could only replace Mandaue City as the partner LGU of the Specialists next season.

Verdida said that the Canlaon LGU was very willing to help them financially. He hopes the city is still interested in partnering with the team next season.

Aside from the team’s financial challenges, Verdida is also concerned with the stacked teams in the Mindanao leg.

But Verdida and his team again embraces their role as underdogs going to the National Finals.

(The teams in Mindanao have very strong rosters. But we will remain competitive and do everything we can because we also want to be national champions.)

The Mindanao leg was initially announced to start on June 22 but was later moved to July 3 due to COVID-19 concerns in the host city of Pagadian.

Verdida believes that the Specialists will overcome all these challenges, just like how they toppled the heavily favored MJAS Zenith Talisay City Aquastars in their best-of-three finals series last May.

Against all odds, Verdida builds a champion team