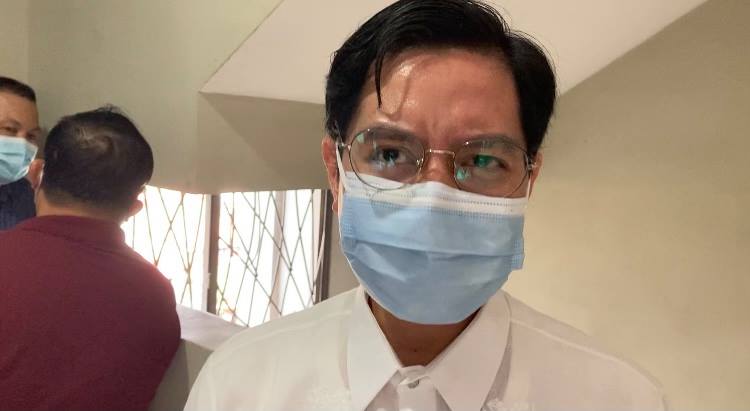 CEBU CITY, Philippines — The shipyards and shipping companies operating in Barangay Tayud, Consolacion can continue to operate until the case they filed against Mayor Joannes Alegado and the head of the town’s Business Permit and Licensing Office (BPLO) shall have been decided by the court.

This after Alegado and the shipyards and shipping companies agreed on Thursday, July 1, to maintain the status quo prior to the proposed reclamation project in Barangay Tayud.

They filed a petition for certiorari and prohibition with an extremely urgent application for the issuance of an ex-parte 72-hour temporary restraining order, a 20-day TRO, and a writ of preliminary injunction, and or status quo ante order.

However, Alegado, in an interview, said the shipyard owners cannot compel the local government unit (LGU) to issue them business permits because they have not complied with the requirements that were asked of them.

Alegado was referring to the tenurial instrument from the Department of Environment and Natural Resources (DENR), though he said it is not a basic requirement since it is not explicitly stated in the ordinance.

“It is very important because tenurial would reflect the ownership of the land. You could not give a business permit if you do not own the area you are operating. It just follows. It’s not part of the basic requirement but it is stated also in our ordinance that the LGU could also ask for other necessary documents.  So it is very necessary to look for the ownership, the foreshore areas are of course a public domain and this is owned by the government,” he added.

The shipping and shipyard companies in the town though, are still allowed to operate although without a business permit.

Alegado said that as the local chief executive, he emphasized its intention to the shipyard owners that they will use the area for the planned reclamation project.

“Because the LGU could not afford to lose the employment of so many employees that they are employing now. So, with that, I believe there’s some sort of a win-win solution though they may operate without a business permit, to that effect, we will not be able to affect them in their business,” he said.

“We could not stop development and progress in Consolacion and we could not just stop our dreams because the shipyards will continue to operate from that area,” he added.

He also shared that they are not being strict or have plans of stripping the shipyard operators, who have been operating for 50 years, of their rights.

He said they have endorsed the shipping companies to other LGUs who could probably accommodate them.

Alegado said that people from the ground are excited about the planned reclamation project believing that this will also answer most of the problems of the town such as traffic congestion.

Alegado said that the proposed reclamation project will be multi-faceted with commercial, institutional, and industrial components.

He said that Consolation is a very small place with 70 percent of the town found in the mountainous areas which are for agricultural and residential purposes. So other developments would be placed in future reclamation areas.

Alegado also claimed that with the completion of the reclamation project, traffic in the town will ease up because tourism, commercial, and industrial activities will be concentrated there. The mayor is also planning to put up a school and hospital in the reclaimed area.

He also hopes that the shipyard owners will understand the stand of the LGU and that they will cooperate and participate in the proposed development.

“As a good gesture and as a true gesture of being kind to them, they could operate and we never intended to put them into closure gyud. Wala gyud na, no plans, whatsoever. It’s just that amo lang sang gihangyo na this time around pagamita napod ang katawhan sa Consolacion kay diha naman sila, nakapahimos na sila…” he said.

“With that, I believe we have agreed ourselves that we cannot give them the business permit but we will still allow them to operate,” Alegado added.    /rcg

Read Next
Cebu City to continue roll-out until next week