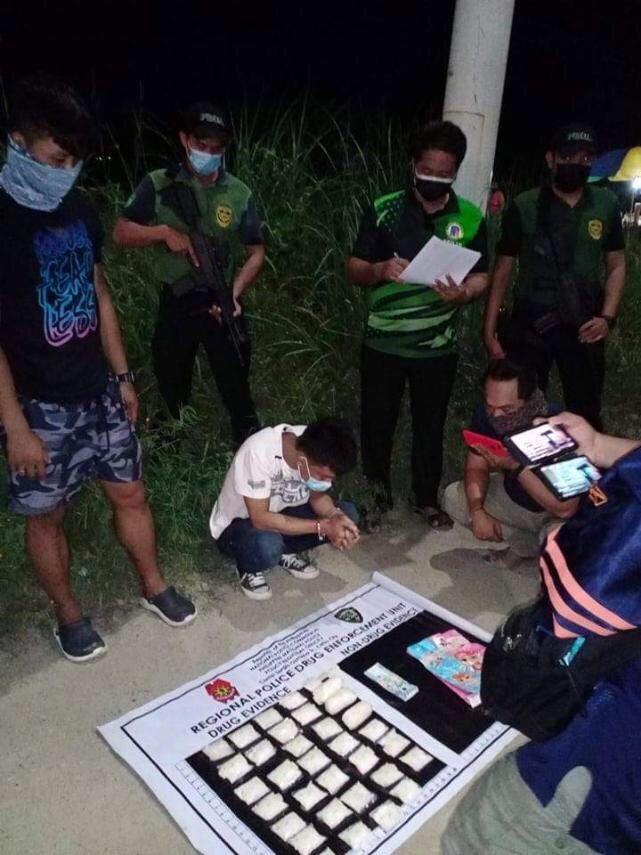 Personnel from the RPDEU-7 in coordination with the PDEA-7 arrested Arthur Jabalde, who was in possession of over P7 million worth of shabu in Vestil St. in Barangay Mambaling, Cebu City past 9:00 p.m. on July 1. | Photo from RPDEU-7

CEBU CITY, Philippines — Operatives are now trying to identify an inmate of the Mandaue City Jail who was alleged as the source of the P7 million worth of ‘shabu’ that they confiscated from a high-value individual last Thursday night, July 1, in Vestil St. (SRP), Brgy. Mambaling, Cebu City.

Police Major Glenn Hife, chief of the Regional Police Drug Enforcement Unit (RPDEU-7), said that they already coordinated with the management of the Mandaue City Jail to help them identify the Person Deprived of Liberty (PDL) whom Arthur Jabalde, 32, the arrested suspect admitted to being transacting with.

Jabalde was arrested during a buy-bust operation conducted by the RPDEU and personnel from the Philippine Drug Enforcement Agency (PDEA-7) past 9:00 p.m. on Thursday.

Hife said that Jabalde was included in the top 10 high-value target list in terms of illegal drug trading.

The suspect’s areas of distribution include the entire Cebu City with over a hundred grams of ‘shabu’ being disposed of per week.

During their interrogation with the suspect, Hife said that Jabalde admitted that his source of illegal drugs was somebody from inside the Mandaue City Jail.

However, Hife noticed that the suspect was limiting the information that he gave to the investigators especially regarding the incarcerated source.

Hife said they believe that the suspect also belongs to a group of big-time drug dealers given the volume of drugs seized from him.

Quoting their initial investigation, Hife said Jabalde has been involved in illegal drug trading for at least six months before his arrest.

The suspect reportedly took a hiatus then went back to drug peddling in the later part of the pandemic. He has also been under surveillance for at least two months before the drug bust was conducted.

With the seizure of more than a kilo of illegal drugs and the arrest of Jabalde, Hife hopes this could decrease the supply of shabu in the streets.

Hife, however, admitted that arresting drug peddlers is a big challenge to operatives as they have become more creative in sourcing and delivering illegal substances during this pandemic.

As of this posting, the suspect is currently detained at the RPDEU-7 detention facility pending the filing of appropriate charges.   /rcg

2 Lorega residents nabbed with P360k worth of ‘shabu’