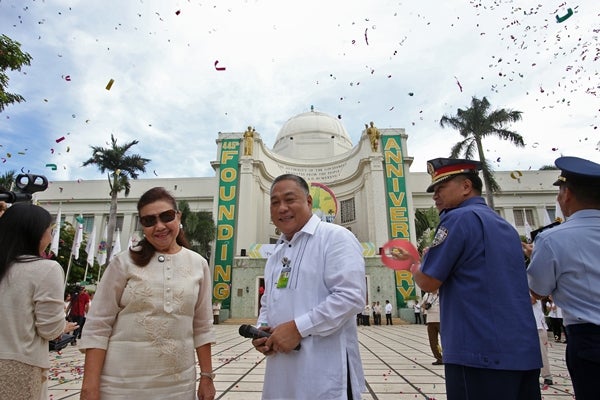 Cebu Gov. Hilario Davide III confirmed that he will announce a bonus for provincial employees during the Capitol’s 445th founding anniversary celebration today.

How much will it be?

“Just wait for it. Whether I make an announcement or not, it would be tomorrow,” the governor told reporters yesterday.

A reliable Capitol source said the amount will be given across the board like last year’s arrangement when Davide was newly-elected and six months on the job.

Last year, the Davide administration granted a P15,000 incentive to its 1,500 employees with everyone receiving the same amount.

The scheme differs from the scheme of former governor Gwendolyn Garcia who based the bonus on the performance evaluation of employees and departments, reaching a maximum of P20,000 per employee.

A merit-based review system is also being set up by Davide’s administration but has not been rolled out yet.

Garcia started the performance-based criteria for cash incentives in 2009.

Those who were rated “satisfactory” received P15,000.

The announcement of the bonus has become a highlight of the province’s annual celebration of its founding anniversary.

“There will be news tomorrow,” he said, hinting of another announcement in the afternoon.

In the morning, a Mass will be held at the Social Hall for all employees and provincial officials followed by refreshments in a “salu-salo” in their offices including the Governor’s Office.

In the afternoon, Capitol departments will compete in a dance contest. Members of the Cebu Provincial Board (PB) will also have a presentation.

The governor yesterday said his wife, Jobella, may participate.

“Mrs. (Jobella) Davide will dance. I won’t because I don’t know how to,” a smiling Davide said.

The Cebu provincial government will also launch a new award-giving body during a dinner banquet at the Social Hall tonight.

This replaces the “Garbo sa Sugbo Awards” of the Garcia administration and follows a different set of criteria.

“We will focus on persons who actually contributed to the development of Cebu and not just those who are well-known and prominent,” she said.

This year’s founding anniversary will be celebrated with a month-long activities in August compared to only a week last year.

Read Next
No drugs found in CPDRC but stoves, weapons seized