‘Jet-lagged’ Pacquiao, 42, awes Roach with sharp form on first day of US training 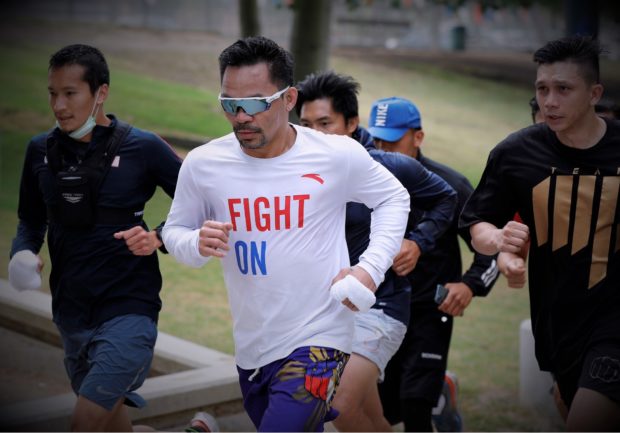 Manny Pacquiao goes on an early morning 8-kilometer run the day after arriving in the United States. —CONTRIBUTED PHOTO

Manny Pacquiao hardly missed a beat in his first training camp in the United States in two years.

Back at his old stomping grounds at Wild Card Boxing Club in Los Angeles, Pacquiao went into serious work with an afternoon training session with his Hall of Fame trainer Freddie Roach.

The celebrated tandem, who spent three hours in the gym, went nine rounds on the mitts with Pacquiao showcasing his explosiveness.

“If this is how Manny hits with jet lag, I may need to get new gloves with thicker padding for our next sessions,” said Roach. “He was incredibly sharp for his first day. He hit hard with good power. After all these years, I’m still amazed at the great condition he’s in when he comes to training camp.”

“After traveling around the world yesterday, he put in a full day here—mitts, speed bag, shadow boxing—the works. The best part was at the end when he lifted his shirt to show me his six-pack (abdomen) and said, ‘Freddie, I’m still here.’”

The 42-year-old Pacquiao, who hasn’t been in the ring since beating Keith Thurman for the WBA welterweight “Super” title back in July 2019, makes his keenly-awaited return as an underdog against two-belt champion Errol Spence (27-0, 21 KOs) on Aug. 21.

Pacquiao started his US camp with an eight-kilometer morning run and 1,000 sit-ups. He also underwent a random drug test from Vada (Voluntary Anti-Doping Association) at his house.

“Errol Spence is a very difficult fight for me; perhaps the most difficult of my career,” said Pacquiao (62-7-2, 39 KOs). “But I have been an underdog my whole life. I am used to that. It is why I work so hard. But the love and the prayers of my fellow Philippine citizens and Filipinos around the world sustain and inspire me. I fight for the glory of our nation and for underdogs everywhere.” INQ