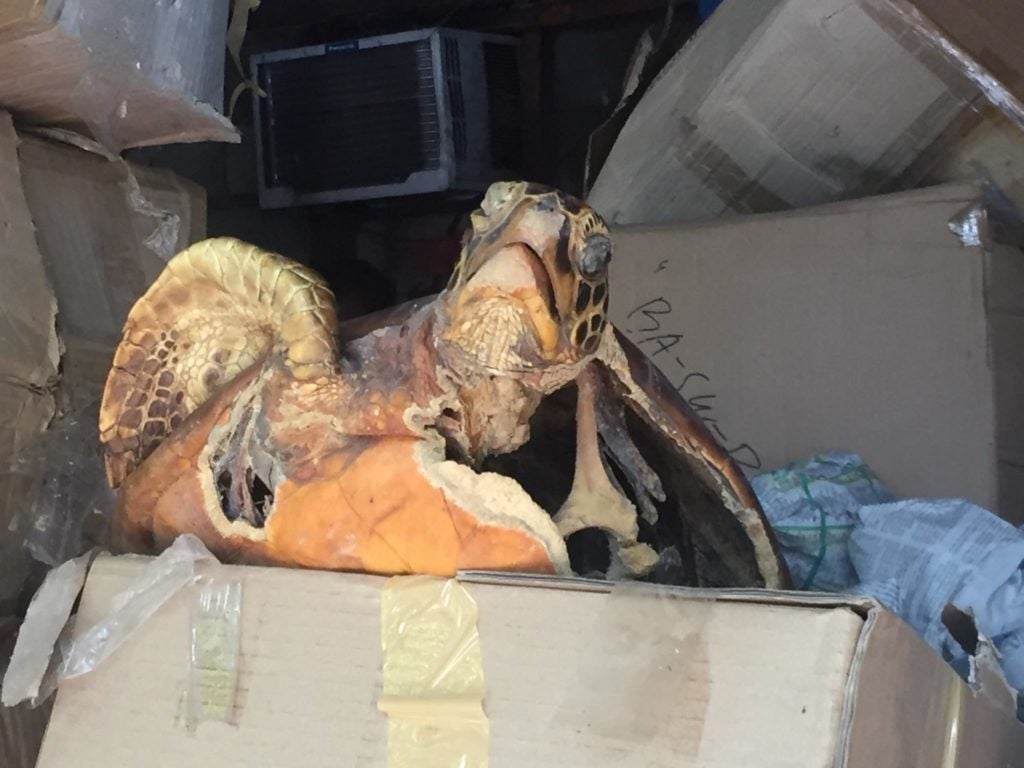 This preserved sea turtle is among the items confiscated by CIDG-7 from two individuals in Barangay Punta Engaño in Lapu-Lapu City last June 30, 2021.

CEBU CITY, Philippines — The Criminal Investigation and Detection Group in Central Visayas (CIDG-7) said the recent  confiscation of over P12 million worth of endangered species in Barangay Punta Engaño in Lapu-Lapu City serves as a warning to those still involved in the illegal trade of these species.

On June 30, 2021, the CIDG-7 confiscated giant clams and shells, sea turtles, shark teeth, and red corals from Emerson Arco, 58, and Bryan Arco, 31. These items were reportedly to be exported to other countries.

(This serves as a waring to those in this kind of business which we all know is illegal. We have already caught some doing this illegal act. So don’t attempt to get into a business that’s illegal because you will be caught when the time comes.)

As of this posting, these suspects are currently detained in CIDG-7 detention facility.

Dalogdog said they will continue their operation against these illegal activities as this is also one of CIDG-7’s mandate through their Simultaneous Anti-Criminality and Law Enforcement Operations (SACLEO).

(We need to preserve these because they are endangered and yet we make it a business. This will further deplete our natural resources.)

Dalogdog said they intercepted this illegal activity on June 30, as they served a search warrant against these two individuals. The  warrant was issued by Judge Jose Alfonso Gomos, the Presiding Judge of the Regional Trial Court Branch 54 in Lapu-Lapu City.

Based on their background check, the suspects allegedly buy these items for a cheaper price from a still unknown source and export these to other countries at a more expensive price. He said that shells were mostly purchased by hotels abroad as they reportedly use these for lamps.

Dalogdog said that they are now tracing what countries are actively purchasing these items. They are also working to determine the source of these items.

Dalogdog said that this is not the first time that they intercepted and arrested individuals engaged in this illegal activity. Last April, CIDG Negros Field Unit seized giant clams amounting to P200 million.

Dalogdog reminds the public that this kind of activity is prohibited in the country as we are serious in preserving our natural resources.

The seized items are still under the hold of CIDG-7. They are now coordinating with the Bureau of Fisheries and Aquatic Resources (BFAR) to turn over seized items and the Department of Environment and Natural Resources for the three preserved sea turtles.