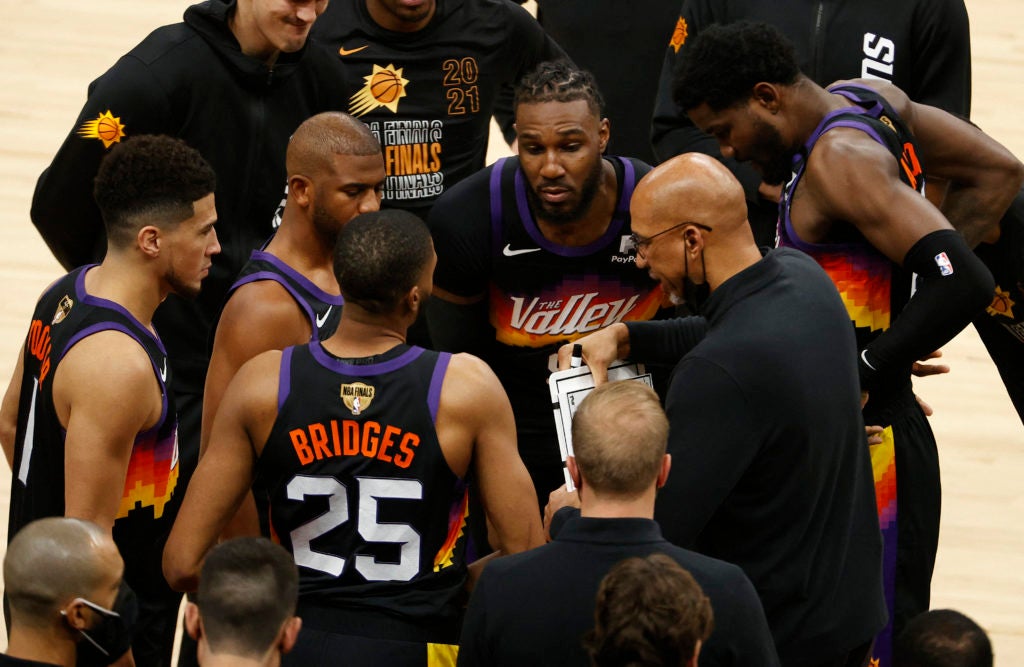 Head coach Monty Williams of the Phoenix Suns huddles his team during the first quarter in Game One of the NBA Finals against the Milwaukee Bucks. | AFP photo

Phoenix—When Phoenix coach Monty Williams yelled after an early season loss that the Suns had the NBA’s worst starting five, the group sat down and had a long, hard talk.

That conversation set the stage for sacrifices, acceptance of roles in a team setting and was a major step in the Suns reaching their first NBA Finals since 1993.

“We were just really honest with each other,” Suns guard Devin Booker said. “Those conversations, all those bits and pieces, all those moments are why we’re in the position we’re in right now. But we still have to get the job done.”

The Suns defeated Milwaukee 118-105 in the opening game of the best-of-seven championship series and can claim a 2-0 edge by winning Thursday.

It could be the first title for the Suns since the team began play in 1968 and the first for star guard Chris Paul, into his first finals at age 36 after 16 NBA campaigns.

“Everybody is comfortable and accepts their roles,” Paul said. “That stuff sort of just happens. You start accepting things. It just kind of evolves. Your team even changes during the playoffs.”

Bahamas 22-year-old big man Deandre Ayton, for starters, has been told what he needs to do by Paul and Booker all season.

“They got to tell me something every day,” Ayton said. “They keep a consistent thing where they are always giving constructive criticism, and I take the best of it.

Ayton had 22 points and 19 rebounds in game one after a masterclass year of fine points from his teammates.

“The way he has worked all season long, he took it to a whole ‘nother level during the playoffs,” Paul said.

“I surprise myself with the type of mental stamina I have, and seeing growth in my maturity,” Ayton said.

“We’ve been tough on him,” Booker said. “He’s continuing to get better. He still has even more in the tank that he’s going to show soon.”

It was a tough way to build camaraderie and teamwork, but Covid-19 protocols didn’t allow much leisure time for team development.

“With all the restrictions we have, we haven’t been able to go bowling, go do these different things you would normally do as a team,” Paul said. “So you have to build that time in practice and on the road, build that trust in wins and on bus rides and plane rides.

“I said when you’re on a good team, you have to sacrifice to be a part of something special and I think that clicked with our group,” Crowder said.

“We had a lot of guys that wanted to do a lot more than what their role was, but it just takes coaching staff, players in the locker room to just mend it all together and just sacrifice for your teammates.

“And look at where we are now.”

Williams had to change his coching style to get what he wanted from his players.

“I was so focused on winning and coaching there were times where players probably felt like I was really tough on them,” Williams said.

“Now I try to be a bit more considerate of how I get my message across… I try to be effective over being right.

“I was more of a doofus then than I am now, but probably still a doofus. I’m OK with that.”

Booker says he has become a key part of the bond the Suns have.

“Him understanding where we come from as players helps out a lot,” Booker said. “That’s what we live on, the energy in our gym, the culture we’re around.”