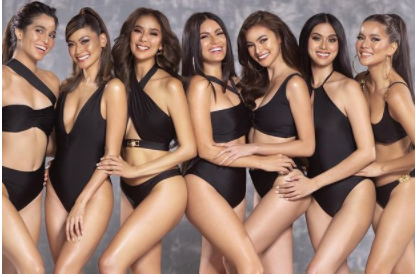 Seven of the Binibining Pilipinas 2019 queens looked sultry and stunning as they donned black swimsuits for a photo shoot ahead of the coronation of their successors today, July 11.

“Once a Binibini, always a Binibini. To say that I’m grateful to have my queen sisters is an understatement!” Bb. Pilipinas Universe 2019 Gazini Ganados said through her Instagram page yesterday, July 10, where she shared the photo.

Bb. Pilipinas Supranational 2019 Resham Saeed is noticeably absent from the shoot. She is currently in Bali, Indonesia and will be missing the coronation night.

Ganados stated that working with her fellow beauty queens and “fixing each [other’s crowns]” has been “precious, infinite and truly beyond beauty.”

“It’s been two years since we were crowned and I’m so excited to see who will be the new Binibini queens!” she told fans.

The Binibining Pilipinas coronation night will be hosted by Miss Universe 2018 Catriona Gray and Miss Grand International 2016 first runner-up Nicole Cordoves. It will be held at the Smart Araneta Coliseum.