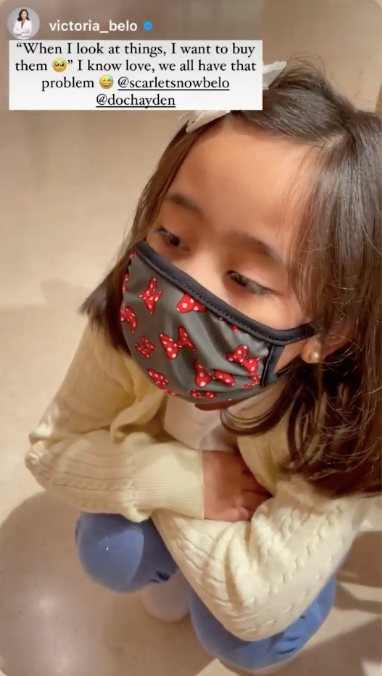 Celebrity baby Scarlet Snow Belo learned an important lesson through her recent experience at a shopping mall in France.

The six-year-old jetsetter had the most relatable existential crisis that almost everyone has had —wanting to buy the things she sees.

In an Instagram (IG) video story of her mom, Vicky Belo, Scarlet was captured talking to her parents about her feelings.

“When I look at things, I want to buy them,” said Scarlet.

Belo comforted her and said, “I know love, we all have that problem.”

“I keep wanting to buy it,” Scarlet tried to convince her mom.

The next IG video showed Scarlet clutching to her father Hayden Kho.

He explained and tried to comfort Scarlet by teaching her a lesson from her own feelings.

“If you wanna kill covetousness, you have to think of being thankful all the time,” Kho explained to Scarlet.

The celebrity family is currently on a trip to France along with actress Rhian Ramos as seen in their social media posts. /rcg