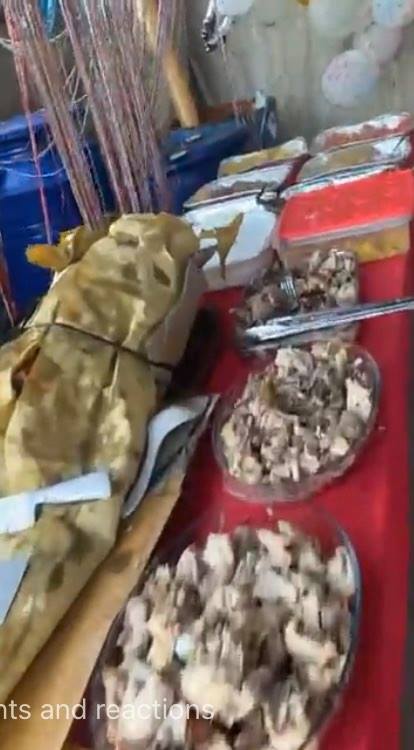 screen grab from the Fb live of Marjorie Alison

MANDAUE CITY, Cebu – A birthday celebration on Sunday, July 25, 2021, went viral for the wrong reasons after a food supplier shared a video of her storming into the party and demanding payment of the balance of the food the client ordered.

Abastas was demanding payment of the unpaid balance of P10,200 from her client, identified as Maria Amy Hofilña, for the food tray package that was delivered to her home in Barangay Babag II in Cebu City.

The food tray that included a lechon (roasted pig), eight side dishes, and two trays of fruits, cost a total of P19, 200.

However, Hofilña said in the video that she was not paying the balance because she was dissatisfied with the food delivery. Hofilña said she ordered food for 5o t0 60 persons but what was delivered was less than what she expected.

The incident on Sunday also led Hofilña to file charges against the food supplier the next day, but she begged off from discussing the details of her complaint.

CDN Digital, however, found out that a complaint was filed at the Mabolo Police Station against Abastas, the online seller, for causing alarm and scandal inside her property.

Hofilña said she has also sought the assistance of the Anti-Cybercrime Unit (RACU-7) regarding the video that Abastas posted online.

(What she did caused a lot of damage.  If I would rather not pay because we had to agree on a possible settlement, why did she post the live video without hesitation and [my] permission.  That was indeed malicious.  That was a malicious action.  It only showed that was part of her plan because the video started while she was walking on the road and while going up to my property.)

But Abastas said she only went to the Hofilña residence to collect the P10, 200 balance. She even had with her barangay tanods (village watchmen) for assistance.

Abastas told CDN Digital that Hofilña made her food order through a reseller on July 19.

Her food package consisted of 30 kilos of lechon, eight side dishes and two fruit trays that was to be delivered to the Hofilña residence in Barangay Busay on Sunday, July 25.

Abastas said Hofilña paid P9,000 as partial payment for the order on July 22, leaving a balance of P10,200 that was supposed to be paid after the delivery was made.  Of the amount, P2,000 was for the reseller.

But Hofilña did not pay the balance after the food delivery was made on Sunday. This prompted Abastas to go to Hofilña’s residence at about 4 p.m. to settle the issue.

(She complained that the package was not worth it.  That is why she refused to pay the balance.  She was dissatisfied by the 30 kilos lechon that we delivered after she requested for an upgrade of the lechon. We also sent eight other viands and two fruit trays.)

Abastas said Hofilña was well aware of the items to be delivered because the reseller provided her with a breakdown before the partial payment was made.

Abastas said she was planning to take back the food order if Hofilña would continue to refuse to settle her balance.

Based on the video, Abastas went to check the buffet table while she also waited for Hofilña, who was still having her photo taken with some guests at their garden. The family was celebrating the birthday of Hofilña’s son.

The argument started when Abastas approached Hofilña to demand payment of the P10,200 balance. Their exchanges created a commotion at the party.

Abastas later on decided to leave with a promise to find means to collect her claims.

In a separate interview, Hofilña told CDN Digital that it was not her intention to withhold payment. But she had to because she was not satisfied with the package.

She ordered a food package that was good for 50 to 60 individuals but what actually arrived was only good for 20 persons.

Hofilña said she even raised her concern with the driver who delivered the food package.

(The driver told me that there was a mistake, what was actually sent to me was not my actual order. My order was still on its way.  So I told the driver to just leave the food behind so I will have something to feed my guests while I wait for my actual order to arrive.)

But instead of getting her food order, it was Abastas who came to see her.

Hofilña said that she tried to keep her cool at first, but she started to blow her top when Abastas started to become angry after she asked the seller if she had an official receipt for the order.

Abastas also threatened to take back the food order if she does not pay, she said.

(I would have wanted to settle because I had my guests who needed to eat. I told her that I am willing to pay but after we reach a compromise and I would like to ask for a receipt.  She instead got mad.)

As a customer, Hofilña said, she had the right to raise her complaints on the items delivered.

With their differences left unsettled, Hofilña said that she is bringing her complaints to court.

Hofilña said she also had to protect herself and her family against the “malicious” Facebook live video that Abastas shared.

“At the end, I have to meet her face to face because ang damage nga iyang gihimo, dili kabayran og sapi. Grabe, I can afford to pay. Wala ko nagmataas, wala ko. Grabe iyang defamation words nga gipanggamit against nako… I will not keep quiet with this. I will do whatever I can in my own power. Mao jud na akong himuon kay of course alangan maghilom rako. Do you think I will just keep quiet and iya rakong ani anion? Iya kong gipakauwawan sa social media,” she said.

(I want to see her face to face because of the gravity of the damage that caused that cannot be compensated by money.  I can afford to pay [for my order]. I was not trying to intimidate her. She defamed me. I will not keep quiet. I will do whatever I can in my own power [to also protect myself and my family.] That is what I am going to do because I cannot just keep quiet. Do you think I will just keep quiet after what she did? She caused me so much shame on social media.)

Abastas said she also logged a formal complaint against Hofilña at the barangay hall in Babag II.

She also logged a complaint against her before a TV program that offers mediation against two opposing camps.