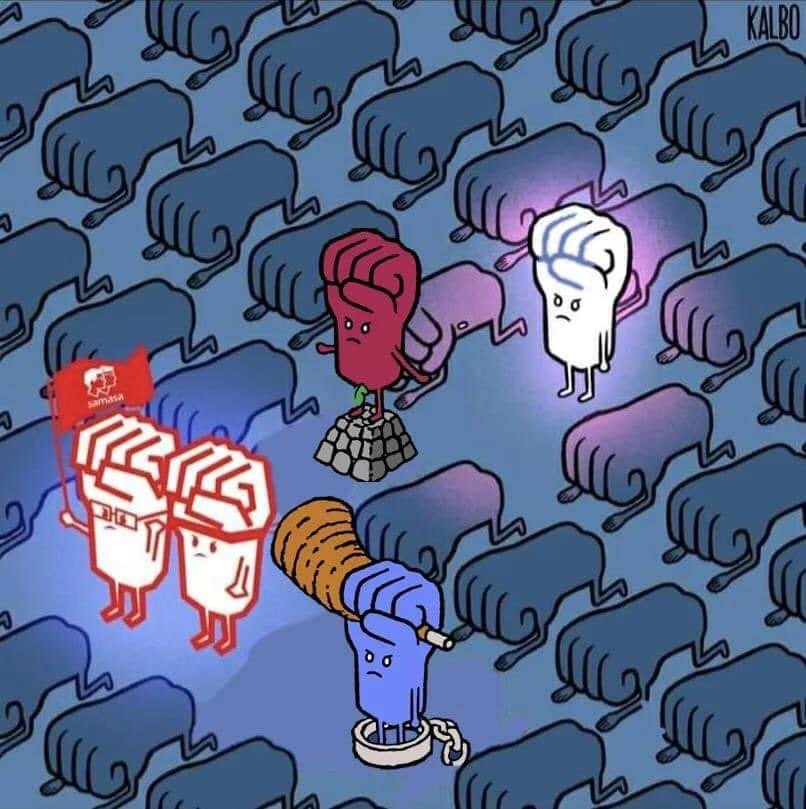 An avatar called “Tumindig” recently became viral with the message that one must stand up for what he  believes in and fight.

The digital drawing posted last July 17 by satirical cartoonist Tarantadong Kalbo centered on a standing fist person amidst a sea of bowed ones representing the fist bump gesture used by President Rodrigo Duterte and his allies.

Followed by other “dissenters”, the raised fist is associated with activists who dared to stand up and stand out from the crowd. The word activism came from the Latin root actus, “a doing, a driving.”

In general, activism consists of efforts to promote or participate in social, political, economic, legal, or environmental reforms with the desire to make changes in society toward a perceived greater good.

Any controversial social issues you can think of involve activism on both sides.

University of the Philippines (UP) has always been associated with student activism. Students have always been a potent force in social organization and social change in Philippine society.

When I entered UP Diliman in 1987, I was warned several times not to participate in rallies and be associated with the activist groups. Perhaps, I was really a nerd for my first two years spending most of my time in the library and classrooms.

It was on my third year that I became part of the UP student movement as the photographer for the Philippine Collegian and later as a member of the Sandigan Para sa Mag-aaral at Sambayanan (SAMASA).

SAMASA began as a University-wide alliance of student organizations campaigning for the return of student institutions such as the  Student Councils. When the USC was re established in 1981, SAMASA won landslide victories in that election and in several elections after.

SAMASA was one of the  major student political parties during my UP student days in the 1980s and 1990s at the, the others include Nagkaisang Tugon ( TUGON).

It was established when students’ movement is at its peak to defend their democratic rights to organize inside and even outside campus grounds.

The UP student activism has taught us the vision of service to the people. The campus moulded us to fight for the causes we believe in; trained us for the skills we need to communicate ideas and rally others to effect changes in society.

One of the SAMASA election campaign poster in the early 1990s featured my photo with the phrase “May panahong magduda’t magtanong, ngayo’y panahon ng pagharap at pagsulong” lifted from one of the progressive songs.

A comrade once said SAMASA was never perfect. It perfectly believed in some ideas which died along the way. But it dared, too, to confront its own weaknesses in order to compose new songs for imperfect realities.

People die, so as organizations. But for some compelling design of certain historically contextualized habits, like commitment and consistency, shadows from the past that persist to own warm bodies manage to resurrect ideas that continue to be formidable. Thus, SAMASA died because it needed to live again!

“Does activism still matter?” is the question posed  during the recent webinar sponsored by SAMASA as part of its 40th year anniversary. SAMASA stalwart Atty. Raffy Aquino summarized the answer of the discussants, including veteran journalist Malou Mangahas, by identifying the four elements of activism.

First, habituality of constancy. Activism cannot be occasional alliances, to be engaged  only when convenient.

Second, change. Activism is progressive, always looking forward to what may be, what ought to be. One who acts only to preserve the ways thing are is reactionary, not activist.

Third, society. It is both the object of change, and its site. It is the betterment of the human condition, as found in communities and countries, that is the activist’s concern. Because power is relevant to the changing of that condition, activism is political.

Fourth, collective action. There are no lone-ranger activists. Activists seek to connect and organize, because the action of many is more telling than the act of one person.

There is a fifth element of activism that runs through these four: thought. Activists have to be both militant and expert, committed and competent; and thus, must be thinking activists. Thoughtful activism demands that we learn and unlearn, read before we write, listen before we speak. We, from the various professions and businesses, enrich all pathways to activism, through constant study and intellectual clarification.

One needs to see the world from a different perspective, not to be complacent to submit to the status quo, and not to be afraid to be critical.