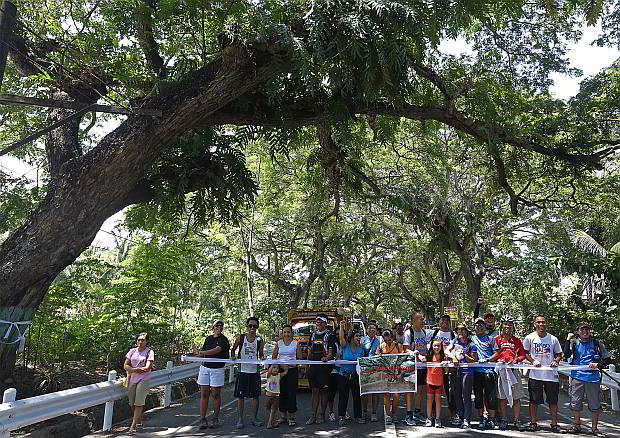 FIGHTING FOR THE FUTURE. Environmentalists led by Fr. Robert Reyes (8th from right) shout slogans at the start of the ‘walk, bike, run’ to save the trees in the City of Naga. (CDN PHOTO/ TONEE DESPOJO)

After the DPWH, it’s now the turn of the Department of Environment and Natural Resources to blink.

Environment Secretary Ramon Paje was reported to have agreed to “rethink and reconsider” the tree-cutting permits they issued for road widening projects nationwide.

This was revealed yesterday by Fr. Robert Reyes, the so-called “running priest” after leading a “walk, run and bike” protest against the plan to level the trees along the national highway in the City of Naga, San Fernando and Carcar in Cebu.

“He called me up. We had a long conversation. I don’t want to preempt him, but the Secretary said with what’s been happening here in Cebu he is seriously reconsidering national permits to cut trees for road widening projects,” Reyes told Cebu Daily News.

The development followed a similar track when Public Works Secretary Rogelio Singson directed his regional chief in Central Visayas to spare the trees in Carcar City.

“Let’s not widen this road in Carcar wven if we get LGU/DENR clearance. Let’s not cut trees anymore for widening,” he said in a marginal note on a clipping of the Philippine Daily Inquirer which shows a picture of a canopy of trees along the highway that were supposed to be cut. The photograph was taken by Cebu Daily News photo editor Tonee Despojo.

Reyes, the chief convenor of the National Coalition to Save the Trees, said that despite his conversation with the DENR chief, there is nothing definitive yet.

Reyes said Paje wanted to meet him in person within the week. Reyes is also set to met with Singson today to discuss the trees in Cebu.

A member of the Youth for Livable Cebu, who joined the priest in tying white ribbons on the trees marked for cutting, confirmed the phone call.

Francis Sollano of YLC said he was with Reyes when the call came at around 10:30 a.m. yesterday.

“The DENR Secretary will review and re-assess nationwide permits of cutting trees for the purpose of road widening due to Cebu’s clamor,” Sollana told CDN.

“However, there is no written order yet and it was done over phone call with Fr. Robert Reyes so we can’t really be definitive,” he added.

Sought for a comment, the regional spokesman of the DENR said they have not received any order or directive from the central office.

“If it’s in a nationwide scale, there should be a department order or a memorandum circular. But so far, we haven’t received any. We also don’t have any information on it,” DENR-7 spokesman Eddie Llamedo told CDN.

The only directive the regional office received was last Friday’s order to revoke the cutting permit issued to the DPWH for the remaining three century-old Acacia trees in Naga City and to deny any other permit application for tree cutting.

With the series of events in Cebu, the National Coalition to Save the Trees smiled on the moves of the DPWH but frowned on that of the DENR.

“We express our gratitude to DPWH Secretary Singson for expressing willingness to have more talks with our National Coalition to Save the Trees led by Fr. Robert Reyes, OFM and Dr. Michael

Bengwayan,” said Patria Gwen Borcena of Greenresearch, a member of the coalition, in a statement sent to CDN.

She described the DENR’s go signal for the cutting of the seven century-old Acacia trees in Naga City as a “death sentence.”

“Secretary Singson already had exhibited political will to save the trees of Carcar even before DENR changed their Gung-ho stance of killing of 88 ‘rotting’ trees in Naga City, Carcar and San Fernando,” Borcena said.

Borcena claimed that even with Singson’s directive, the DENR has refused to heed their calls to spare the trees. She said DENR-7 Regional Executive Director Isabelo Montejo was not amenable to postponing the cutting until an independent private group could make a third-party assessment on the trees’ health status.

She also quoted DENR’s Llamedo insisting that since DENR issued the cutting permit, they are the only one who can stop the cutting of the trees.

“Sec. Ramon Paje and his minions in DENR should  have demonstrated their political will to save trees sooner,” said Borcena, an environmental sociologist.

“Perhaps, the DENR will learn its lessons this time — allow a greater participation of civil society  in environmental governance and heed the calls of the National Coalition to Save Trees — not only for Southern Cebu but to other areas where trees are threatened by government projects,” she added.

Efforts to save the south Cebu trees are part of the nationwide campaign to save trees threatened by government projects. The National Coalition to Save the Trees was launched last June 5, which was World Environment Day, with Fr. Reyes and Dr. Bengwayan as lead convenors.

Earlier in the day, Reyes called on Cebu Gov. Hilario Davide III to take their side in saving the trees.

“Please Governor, I know your father personally. Keep the trees. Preserve justice as the chief justice’s son. Preserve heritage trees,” Reyes said as he spoke before the participants of the solidarity walkm run and bike in barangay Tinaan in the City of Naga. 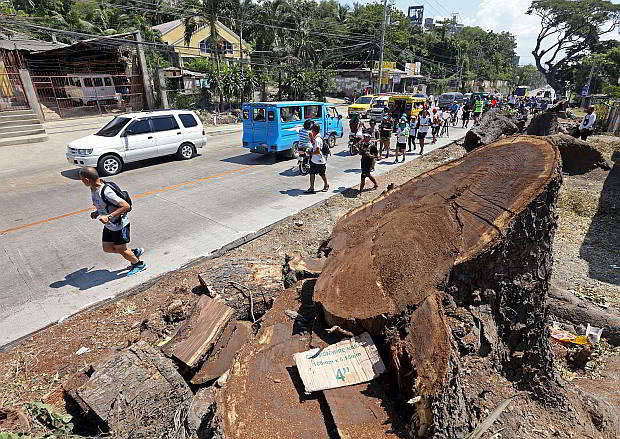 Fr. Robert Reyes lead a pack of environmental advocates who run and bike from the City of Naga to Carcar City. They pass by an Acacia stump. The tree according to DENR was diseased and could pose danger to the motorists. (CDN PHOTO/ TONEE DESPOJO)

“These are not only century trees, but also heritage trees. Heritage is a word which means history, culture, spirituality, and everything that is invisible. Everything that Cebuanos appreciate within the century,” he added.

The activity started at 9:30 a.m with participants tying white ribbons on the trees. The first ribbon was tied on a chopped down acacia tree near a cement plant. The tree was among those cut recently by the DPWH.

“I hope that these trees will be saved and cured. Just like humans, if we get old and sick, then we need the proper care and cure,”  Reyes said.

Children who joined the activity were also made to tie ribbons on the old trees. Reyes said they want these children to see for themselves what they have helped save when they grow up.

Among the children who tied ribbons was  Maya Toralba. 9.

“I want others to save these trees because they are old and sick. Even if others do not want to save them, we will,” she said.

The protesters also lit candles before the cut trees. Reyes said they are praying for the souls of the dead trees.  “Trees also have souls, just like the humans,” he added. 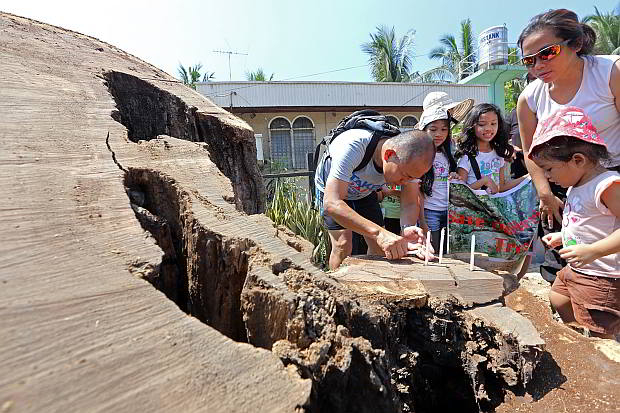 Fr. Robert Reyes lights a candle on a tree that was cut by DENR to pave way for a road widening project. (CDN PHOTO/ TONEE DESPOJO)

Reyes also revealed that a  group will file a case against those who approved the cutting of trees within the week. He said officials of the DENR, DPWH, local government units including Gov. Davide will be impleaded in the suit.

“The complaint is against them because they allowed the cutting of trees to happen. They also violated the Environmental Compliance Certificate (ECC),” he said.

“There must be a process with the cutting of trees. There should have been public hearing and  this must undergo a study,” he said.

Read Next
Gun crimes up in Cebu City