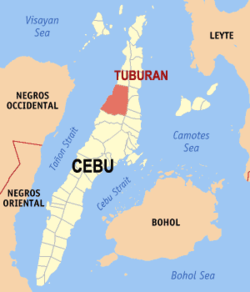 Tuburan town located in the northwest of Cebu island.

CEBU CITY, Philippines — “It was self-defense.”

(The priority of the police is to save lives. In this situation, it is difficult to choose where to shoot because the (other person) was in the act of pulling out his gun.)

(It is difficult for the police in defending themselves and to choose where to shoot. Things like this happen especially in situations like these.)

Soriano was referring to the action of the policeman, who shot Danilo Sampalad twice in the stomach, when the latter allegedly tried to pull out a gun tucked in his waist.

The CPPO chief came to the defense of the policeman after conflicting reports came out that Sampalad only threw stones at the policeman, who responded to a call for assistance from Sampalad’s wife, whom Sampalad allegedly earlier mauled.

Police, however, did not know the reason for the mauling.

Aside from Sampalad’s wife, a barangay tanod also sought police assistance to arrest Sampalad, who was causing a disturbance in the barangay and had violated the Barangay Daan Lungsod’s Protection Order.

This order issued by the barangay captain is used to prevent possible suspects from committing acts of violence against member(s) of the family, especially women and children.

Soriano also defended the policeman’s action especially since a neighbor claimed that Sampalad was unarmed during the incident.

According to the police investigation, Sampalad when he saw the several policemen accompanying his wife to their house, allegedly shouted invectives at them and then threw stones at the policemen, who tried to calm him down.

This prompted one of the policemen to fire a warning shot to stop Sampalad from throwing stones at them.

After this, Sampalad went inside the house and closed the door behind him.

One of the policemen later followed inside to talk to Sampalad, but when the policeman opened the door, he allegedly saw Sampalad armed with a bolo and a gun tucked to his waist.

Sampalad allegedly pointed the bolo at him and allegedly told the policeman that he wanted a fight to the death with him.

(Let us fight to the death, sir. I will not let myself be arrested alive.)

Moments later, Sampalad allegedly reached for the gun tucked in his waist.

It was then that the policeman fired first at Sampalad to defend himself.

The policeman shot Sampalad twice in the stomach.

Later, the Tuburan policemen rushed Sampalad to the Tuburan District Hospital where the attending physician declared him dead on arrival.