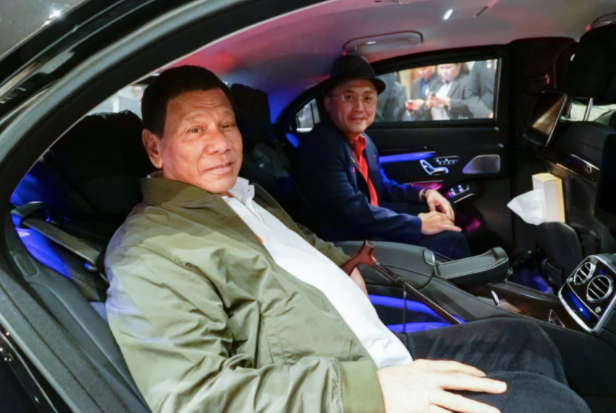 FILE PHOTO: President Rodrigo Duterte and Senator Christopher “Bong” Go pose for posterity while onboard a vehicle going to the Haneda International Airport following the President’s attendance at the Ceremonies of the Accession to the Throne of His Majesty Emperor Naruhito at the Imperial Palace on October 22, 2019. KING RODRIGUEZ/PRESIDENTIAL PHOTO

MANILA, Philippines — The tandem of Senator Bong Go and President Rodrigo Duterte for the 2022 national elections is the “popular” and “logical” choice for PDP-Laban, an official of the ruling political party said Friday.

PDP-Laban Secretary General Melvin Matibag in an online interview explained some of the reasons why the party’s national executive council, of which he is a member, endorsed the “formidable” Go-Duterte team for the polls next year.

The endorsement for a Go-Duterte tandem, however, is still subject to a vote during the party’s national convention on September 8.

“I will be honest, I think all of us didn’t consider anyone else kasi [because] the logical and popular choice is the Go-Duterte tandem,” Matibag said.

“That is a formidable team anyone cannot match, that is my personal position,” he added.

(That is personal preference and out choice. Why will we pick someone who we do not like or we don’t believe can carry the party in the May 2022 elections?)

Go, who is a long-time aide of Duterte, has repeatedly said he should be excluded from the 2022 election talks, particularly on seeking a higher position next year.

Meanwhile, Duterte, on numerous occasions, has expressed his openness to run for vice president in 2022.

(A long time ago, even the provincial council of Cebu…when there’s a resolution calling for the President to run as vice president, what they urgently want was, ‘Can we already endorse Senator Bong Go as a presidential candidate?’)

READ: PDP-Laban adopts reso to ‘convince’ Duterte to run for VP in 2022 polls

“But we want to go through [the] process…But right now, this is a collective decision of the personal decision of all the officers ng [of the] executive council,” he added.

Nevertheless, Matibag said, the final decision is still left with Go and Duterte – if they will run or not for president and vice president, respectively, as endorsed by the party.

But the PDP-Laban official surmised the two will end up heeding the call of party members should the endorsement be adopted during the national convention next month.

(Because what they will consider here is what will be the best for the nation, not of their own interests.)