In search of bigger payday, Casimero vows to send Rigondeaux to retirement 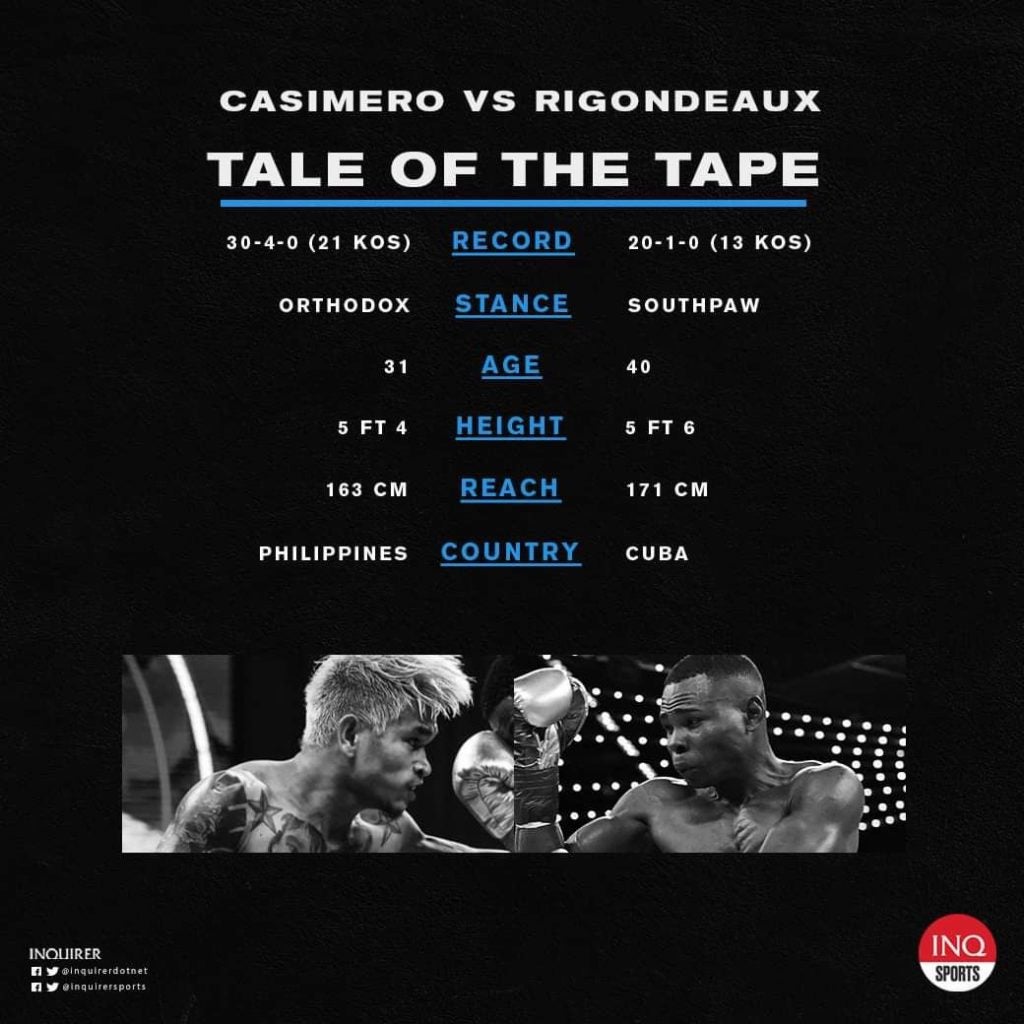 LOS ANGELES—On Saturday night, John Riel Casimero gets the chance to shed his colorful, zany image and become the A-list world champion he has long desired to be. All he has to do is beat Cuban challenger Guillermo Rigondeaux.

The brash-talking Filipino believes he will do just that.

“Don’t worry Rigo, this will be your last fight,” Casimero told his 40-year-old foe, addressing him by his nickname, never mind that the two-time Olympic champ is known to frustrate attack-minded sluggers like the Filipino title-holder.

Casimero made the remarks during Friday’s weigh-in, where he tipped the scales at an exact 118 pounds—the bantamweight limit. Rigondeaux came in at 117.5 lbs. That cleared the way for the fight at open-air Dignity Health Sports Park in Carson, some 20 miles from here.

With his World Boxing Organization bantamweight title and dreams of landing the big-money fights on the line, Casimero will need to find ways how to power his way past the vaunted defense and counter-punching of the crafty Rigondeaux.

Casimero is hoping to cash in on this fight so he can have a crack at Naoya Inoue, the Japanese lineal champion and top draw of their division.

He’s not only looking for an easy win. Instead, he needs a kind of performance that would transform him from just another exciting boxer to a true-blue main attraction.

“John Riel will launch a deadly punch,” said Neri in Filipino. “We will not target the head, it’s too small. So we need to connect to the body.”

Fighting under the banner of Manny Pacquiao’s MP Promotions, Casimero had knocked out all of his last six opponents, putting him in an even better position to crash the elite list of top-draw bantamweights.

But a cautionary tale should serve him well. Back in 2013, Nonito Donaire was basking in the glory of being the 2012 consensus Fighter of the Year. But he ran into Rigondeaux in New York City and crash-landed back to earth.

Donaire struggled with Rigondeaux’s style, which isn’t exactly made-for-TV but is highly effective. The difficulty of facing the Cuban and the fact that matches against him could lack highlight action has made several boxers nix bouts against him, a fact Rigondeaux pointed out.

“I congratulate Casimero on making weight. I know full well it isn’t easy. I also give him credit for accepting this challenge. This man had the courage many other lacked. You all know the names of those true cowards,” Rigondeaux said on Twitter.

Rigondeaux was only beaten once in his career. That’s when he retired on his stool after six rounds, handing the victory to Vasyl Lomachenko in a super featherweight clash in 2017.

Lomachenko, also a two-time Olympic winner, later said Rigondeaux was a fish out of water at super featherweight and he proved it during the fight where he pummeled Rigondeaux with a deluge of punches.

Casimero, aching to be taken seriously, could attempt to follow that template.

Read Next
Modify ‘no vaccine, no work’ ban