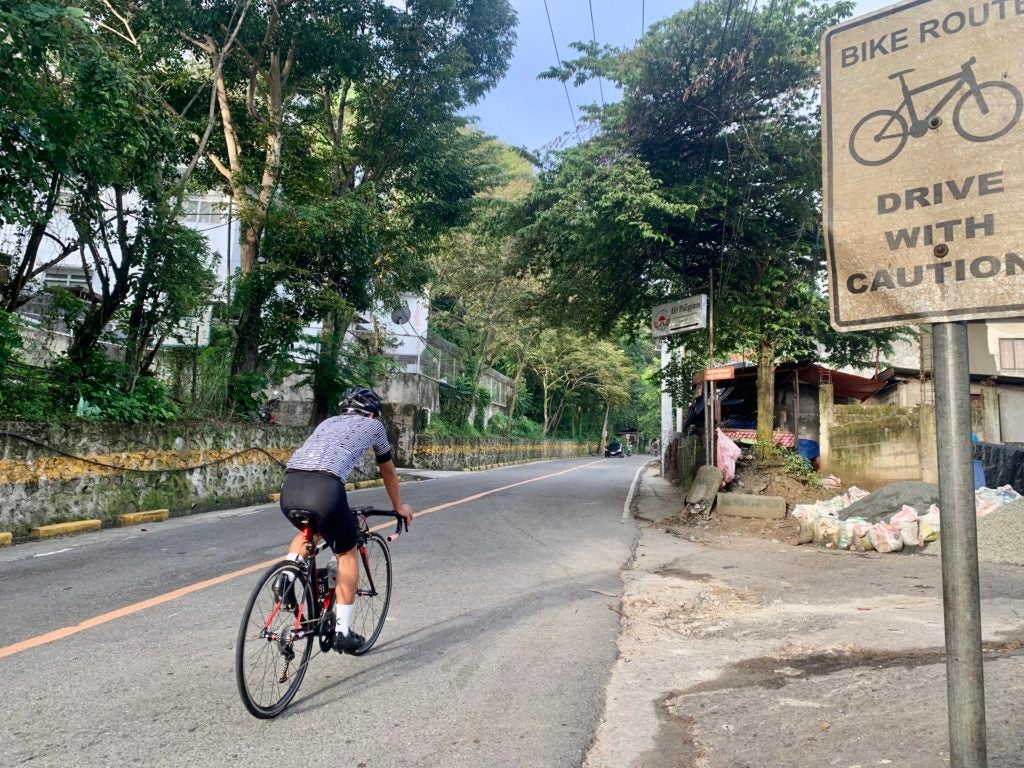 A cyclist takes on the treacherous Transcentral Highway in Busay, which is a known bike route for cyclists in Cebu. | CDN Digital file photo

MANDAUE CITY, Cebu – Talisay City Mayor Gerald Anthony Gullas said he will continue to allow leisure biking in his city during the duration of the Modified Enhanced Community Quarantine (MEQC).

However, this will only be limited to city residents to avoid overcrowding of the bike routes.

Gullas made his announcement on his social media page after he also met with Lieutenant Colonel Gerard Ace Pelare, his police chief, to discuss the concern on bikers who are said to be crowding Campo 4, particularly the vicinity of the steel bridge and in Barangay Manipis especially during weekends.

On Tuesday, August 17, Pelare wrote Gullas to recommend the temporary suspension of leisure biking for non-residents city as a means to prevent the spread of the coronavirus disease.

“As the agency tasked to implement the IATF Guidelines and the pertinent Executive Orders, our units on the ground reported uncontrollable conglomeration of bikers in Campo 4 (near the bridge) everyday but most especially during weekends,” his letter reads.

Pelare said they have also been getting reports that some bikers do not wear masks or would remove their masks occasionally.

“While we understand the need to physical conditioning, we also cannot close our eyes to the possibility may worsen the Covid-19 situation especially that our city has been recording a steady rise in Covid-19 cases,” Pelare said in his letter.

Thus, he recommended the temporary closure of biking sites located Jaclupan, Campo 4 and Manipis to bikers coming from other localities “in consonance with the IATF Guidelines and the Executive Order of the Governor.” 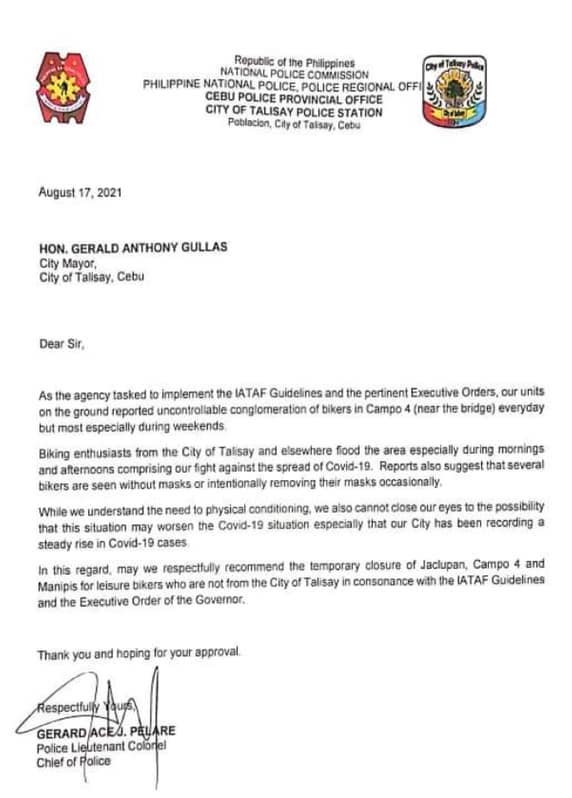 Gullas, who expressed his support for the biking community, said that IATF guidelines allow leisure biking in MECQ areas “as long as the minimum health protocols are observed.”

“But if those protocols are not met by the bikers themselves, the City could be forced to review its protocols,” he said.

But for now, Gullas said he will continue to allow leisure biking in popular biking routes in their area but only for Talisay City residents.

Non-residents, who will bike to their work places in Talisay City, will also be allowed entry after their show their company IDs.

(Cebu City no longer allows leisure biking so it is very possible that these bikers are now in Talisay City which will cause overcrowding in areas of convergence at the Manipis route.)

In order to prevent overcrowding, Gullas said, he will have to prevent the entry of non-residents during the duration of the MECQ.

“But be warned, if daghan napud reports sa  magtapok-tapok along Manipis and Camp 4 next weekend, I will have no choice but to follow the police’s recommendation and temporarily close the barangays from bikers,” he said.