Rotunda at SRP gets nod of Cebu City Council

Councilor Jerry Guardo, the council’s chairperson for infrastructure, said that the DPWH-7 had presented their initial plans to the City Council on August 18, 2021, and though some concerns were raised, the council members were generally approving of the project.

The project plans to place a rotunda at the SRP-F. Vestil junction where currently no vehicles are allowed to cross. All vehicles have to use the round-abouts, with vehicles bound for the south has to go north more than two kilometers just to make a u-turn.

The inconvenience of the current traffic situation will be solved by the rotunda where all vehicles coming from all directions will be running in a singular movement at the rotunda and then exit to their desired lanes. 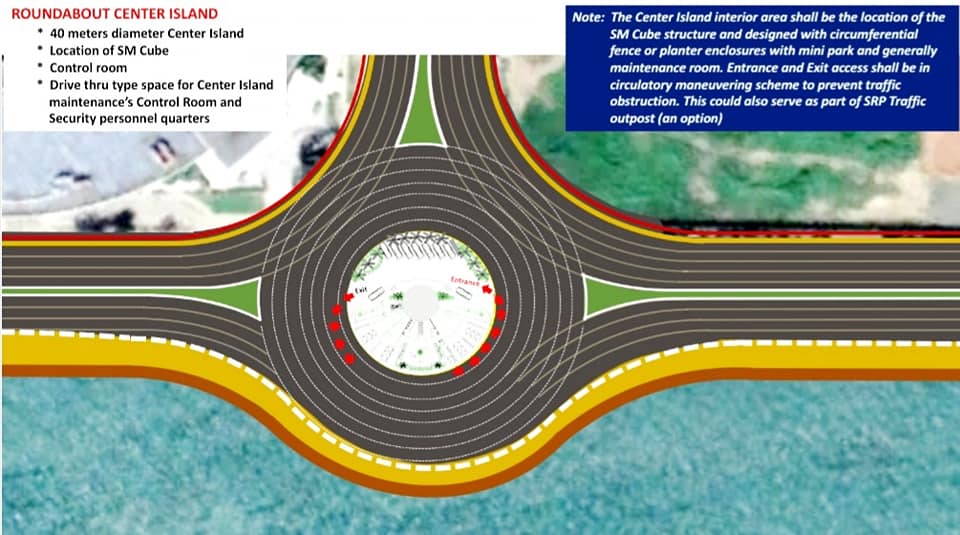 Proposed rotunda at the SRP in Cebu City.

There will be a need to expand the SRP and F. Vestil roads due to the planned project. This means, that the DPWH will reclaim the coastal area of the affected portion up to five meters.

The DPWH-7 also plans to build a boulevard and they will be building a skywalk for pedestrians to cross the SRP to access the coastal side. It is not yet clear what the plans will be for this boulevard.

Since the City Council has approved the project, DPWH-7 will now present this to the National Economic Development Authority (NEDA) for project prioritization and funding.

Once NEDA approves of the project, the DPWH-7 can then proceed to the detailed engineering designs plans, expropriation of properties, and eventually construction.

The City Council asked the DPWH to ensure that traffic will be managed during the construction of the rotunda.

Guardo also said that the project’s start would not overlap with the completion of the Cebu-Cordova Link Expressway (CCLEX) to avoid traffic jams at the SRP.

Should the project push through, construction may begin in mid or late 2022, by then, the CCLEX would have been open and operating.

The councilor is hopeful that the project will be realized because the SRP’s turnabouts have long been an inconvenience for motorists and public transports.

Open-space park being pushed for SRP