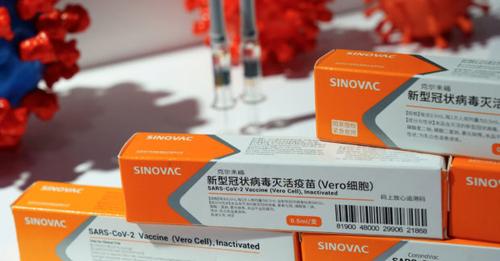 President Duterte on Friday told Chinese President Xi Jinping that the Philippines would remain “neutral” on geopolitical issues, as he thanked Beijing for its latest donation of COVID-19 vaccines.

Mr. Duterte welcomed the arrival of 739,000 Sinopharm doses that were part of the 1 million doses of that brand that China had pledged to the Philippines.

The President, who was also inoculated with Sinopharm from an earlier batch given by China, asked the Chinese ambassador to convey to Xi his “deepest gratitude and many, many thanks for China’s attitude to us.”

“That even though in these challenging times of geopolitics, [the] Philippines will stay neutral and remain true to what we have guaranteed China at least during my term,” he said.

He did not specify the challenges or issues alluded to in his statement, but the Duterte presidency has been largely defined by a controversial policy not to press the country’s historic arbitral tribunal victory against China’s sweeping claims in the South China Sea in exchange for Chinese economic aid and loans.

Mr. Duterte said the latest donation of vaccines and medical supplies, along with the technical support extended to the country’s health sector, was a “testament of the goodwill of the Chinese government and the deep strong relations” between the two countries.

He said the donated vaccines would help boost his administration’s efforts to achieve herd immunity and encourage more Filipinos to get inoculated.

Addressing Filipino health front-liners, including those employed overseas, he said: “Be assured that we in government will do our best to protect and incentivize you [for] your hard work. We will always be by your side, ready to help in any way we can.”

His statement came amid rising complaints from health-care workers about their delayed cash allowances and other benefits.

Chinese Ambassador Huang Xilian used the occasion to stress that “solidarity should prevail over attempts to politicize the (COVID-19) issue, such as origins tracing and shifting the blame to others.”

If countries work together to build a “great wall against COVID-19 and promote economic recovery,” they would be victorious against the pandemic at an early date, he added.

“These difficult times highlight our friendship and partnership between our two nations and two peoples. We are committed to continuing this cooperation with the Philippines and providing more vaccines to help defeat the virus and revitalize the economy,” Huang said.