Polite populism: From Jokowi to Isko 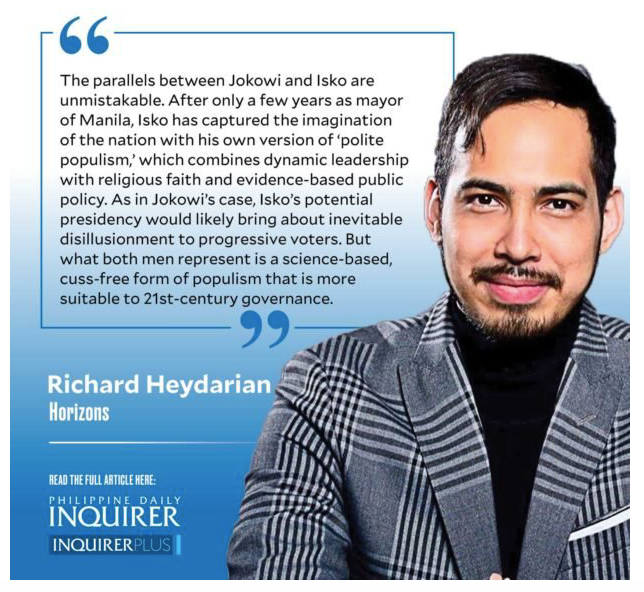 Populism is the ivermectin of democracy. It thrives on widespread uncertainty and desperation among disillusioned voters who have lost faith in established sources of authority. Populism raises some crucial questions about democratic governance, yet it often fails to provide evidence-based solutions to consequential issues it rightly highlights.

As political scientist Cas Mudde explains, populism represents “an illiberal democratic response to undemocratic liberalism,” yet the same potentially corrective catharsis tends to be driven by an “uncompromising stand [that] leads to a polarized society” while “its majoritarian extremism denies legitimacy to opponents’ views and weakens the rights of minorities.”

This is why leading experts such as Jan-Werner Müller maintain that populism is ultimately “an exclusionary form of identity politics,” which “tends to pose a danger to democracy.” In short, populists are often the wrong vessel for the right message.

But just as viruses mutate, and pandemics transform into less harmful endemics, so does populism. Next year will likely mark not only the end of the worst part of the COVID-19 pandemic but also the controversial reign of President Duterte. Make no mistake, Mr. Duterte may be gone soon, but populism is here to stay.

By all indications, Mr. Duterte’s natural heir is not one of his anointed successors, but instead an ally-turned-rival in the person of Manila Mayor Francisco “Isko” Moreno Domagoso, who is effortlessly beating the man in Malacañang in his own populist game.

To understand what a potential Isko presidency would look like, we can look to neighboring Indonesia’s charismatic leader, Joko Widodo, more affectionately known as “Jokowi.” The Indonesian leader is arguably the most prominent example of what can be described as “polite populism,” a more anodyne package of charismatic leadership, unorthodox politics, and personal decency.

My personal obsession with populism likely began a decade ago when I heard about the rise of the “Obama” of Asia. No, I’m not talking about former vice president Jejomar Binay, who once styled himself after the iconic American president, but Jokowi, then Indonesia’s rising star, who happens to have an uncanny resemblance to the former White House occupant.

There are no ideal politicians, but Jokowi was everything one wished for in a leader of a fledgling democracy such as Indonesia back then. Jokowi’s path to power was just as surreal as it was inspiring. A progressive mayor hailing from a small town, Surakarta, the youthful Jokowi captured his country and the world’s imagination with his uncanny combination of decisive leadership and compassionate governance.

In the words of Indian essayist Pankaj Mishra, Jokowi presented a “new economic model” that emphasized the interest of small and medium enterprises over conglomerates. Jokowi was from a humble background, and his path to power was built on an unprecedented grassroots mobilization that upended the politics of the world’s largest Muslim-majority nation and third largest democracy.

Jokowi represented a refreshingly progressive alternative to the Indonesian oligarchy. Thanks to middle-class support and youth mobilization, he pulled off a shocking victory in Jakarta’s 2012 gubernatorial race, which placed him on the path to the presidency only a few years later.

During his short stint as Jakarta’s chief, he regularly visited cramped slums, met marginalized citizens and ordinary folk (“orang kecil”), and kicked off massive infrastructure projects that improved public services to millions of Indonesians. What made Jokowi particularly unique was not only his social media savviness, but also his sincere emphasis on humane, accessible, and compassionate leadership.

Rejecting Indonesia’s long history of authoritarianism, Jokowi promised to “fight to preserve human rights” and “fight against injustice.” Twice he managed to handily beat Prabowo Subianto, a former general who had praised Indonesian autocrats, been implicated in human rights violations, and often sounded not too different from our own Mr. Duterte.

The parallels between Jokowi and Isko are unmistakable. After only a few years as mayor of Manila, Isko has captured the imagination of the nation with his own version of “polite populism,” which combines dynamic leadership with religious faith and evidence-based public policy.

As in Jokowi’s case, Isko’s potential presidency would likely bring about inevitable disillusionment to progressive voters. But what both men represent is a science-based, cuss-free form of populism that is more suitable to 21st-century governance.