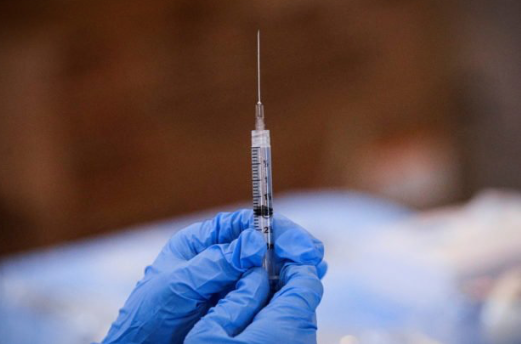 FILE PHOTO: A syringe is filled with a dose of Pfizer’s COVID-19 vaccine. REUTERS/Brendan McDermid

MANILA, Philippines — The House of Representatives’ inquiry on the local government units’ (LGUs) pending request for procurement of COVID-19 vaccines heated up on Thursday, with one lawmaker saying the national government seemed to be “playing God” in the situation.

House Deputy Speaker Rufus Rodriguez questioned why the national government has yet to sign the request for procurement agreements by several LGUs in the country.

He noted that despite issues with supplies and pricing, the government can still sign the procurement deals so that LGUs can at least be in line once supply is available.

“Under the law, it says here that in the procurement of COVID-19 vaccines, the DOH and the NTF shall be authorized to negotiate and approve the terms and conditions on behalf of the LGUs and the private procuring entities. In other words, you sign first the MPAs (multi-party agreements) and help them be able to negotiate,” Rodriguez said.

“There are pending MPAs with you and you have not signed it for wrong reasons. Reason for supply? If you signed them last March and April, then these MPAs would already have been sent to the supplier, and then meantime, you are going to negotiate also if you believe that the pricing is high, you, according to the [law], should be able to negotiate,” he added.

The “inaction” from the national government on the MPAs, Rodriguez said, is one of the reasons behind issues in achieving the 90 percent inoculation target.

“These are monies of the private entities and the LGUs. The MPAs should be signed and then help them be able to get good pricing and help them with the supply,” Rodriguez said.

“You are saying, ‘let us throw this to the wastebasket’—this particular bill that we worked hard. Is that what you want to do? You throw this out because in your mind there is no supply, the pricing is high… People are dying because of the lack of vaccine,” a visibly upset Rodriguez added.

Rodriguez said that if the pending MPAs were approved in the previous months, the “vaccines would have arrived.”

“Explain to us that inaction and even failure to answer the letters of the LGUs and companies,” Rodriguez said.

In response, vaccine czar Carlito Galvez said that they cannot sign an MPA “without a direct contract.”

“That is lacking due diligence. I cannot sign any document without direct contracting. Second, even if we have signed our contract… no supply will come and help our governors to vaccinate because the supply will come in 2022,” Galvez said.

“We cannot sign a contract with no definite supply because this is included in the payment of terms. Payment of terms includes the indicative date, mahihirapan tayo because I am just protecting the money of the LGU… Due diligence is necessary on this,” he added.

But AAMBIS-OWA Partylist Rep. Sharon Garin, who chairs the House committee on economic affairs handling the inquiry, said that other countries still continued signing deals with vaccine manufacturers despite the lack of supply.

“Our last order was July 15, but after that, other countries—a total of 2 billion doses—were ordered pa. That just shows that there will be a supply. Everybody knows there’s a shortage but there are still orders coming in,” Garin said.

Rodriguez backed Garin saying: “The national government is playing God here. They say they want to protect the LGUs, but the LGUs are protecting themselves.”

“They should already have their MPAs and submit it already and be online with the supplier so that when they have supply, they can give. Kung wala tayong naka-pipeline doon, talo tayo,” he added.

According to Galvez, the Philippines has received 52,792,130 doses of COVID-19 vaccines and is expected to receive more than 61 million more in September and October.