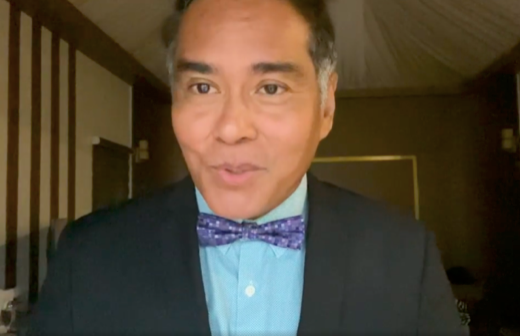 John Arcilla has won the Best Actor award at the 78th Venice International Film Festival for his performance in the Erik Matti film “On the Job: The Missing 8.”

The actor’s trophy, the Volpi Cup, was received by Matti as seen on the awards show streamed on the film festival’s official YouTube channel today, Sept. 12.

Arcilla also delivered a speech thanking the festival for the recognition, while also expressing regret over not being able to personally receive his Volpi Cup.

“I will not be able to kiss my own Volpi Cup there in the middle of Venice and on that red carpet just like the other 77 great actors whom I admire who have already kissed their own,” Arcilla said.

“I know that we came from different countries and we have different languages and cultures and yet I can feel that you understand me and we understand each other. It’s because of the art of cinema,” he added.

Arcilla showed his full acceptance speech through his Instagram page, also today. He then admitted that he felt speechless over the victory.

“This Volpi Cup is such a symbol of a milestone in my work as an actor, just like my cup of life which is so full of blessings outpouring from the [heavens.] I wish I can share this [with] all my loved ones who left us in this lifetime,” the actor said.

“On the Job: The Missing 8” is the only Southeast Asian film selected for the In Competition section, as per a release by the Film Development Council of the Philippines last month.

It revolves around a journalist named Sisoy Salas (Arcilla), who looks into the disappearance of his colleagues. The film also stars actor Dennis Trillo as Roman Rubio, a prisoner who fell into the gun-for-hire business.

The film is a follow-up to the internationally acclaimed action-crime film “On the Job” in 2013, which starred Gerald Anderson and Joel Torre.