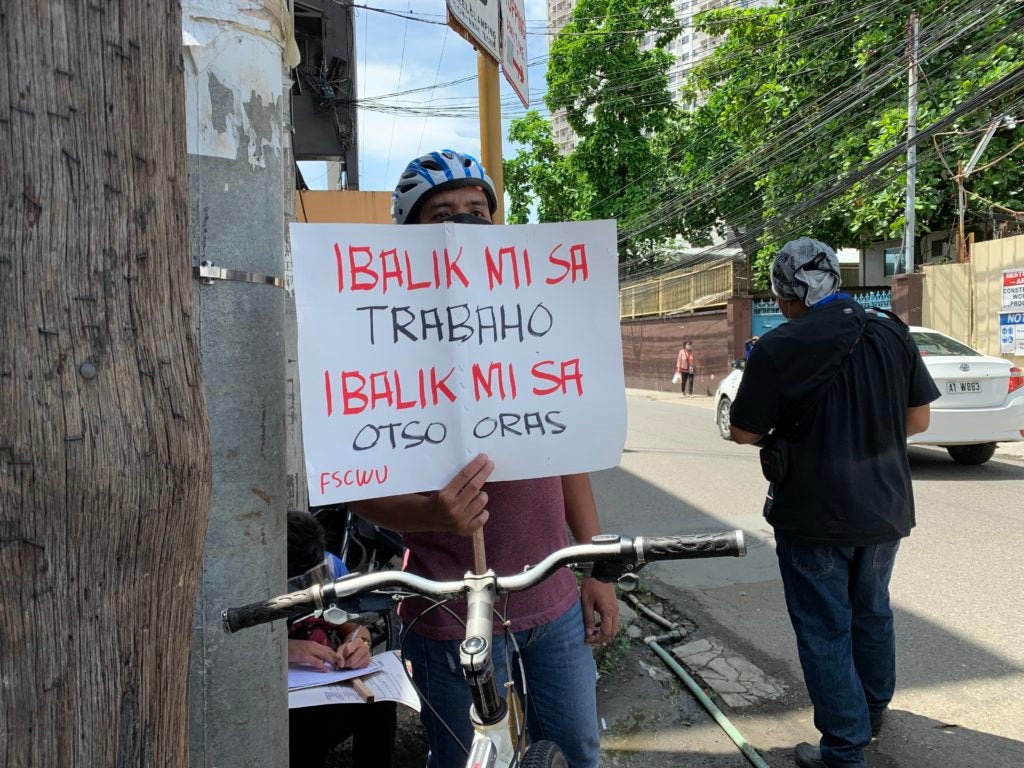 An employee of Fooda Saversmart participates in the labor strike on Friday, September 17, outside the establishment located along General Maxilom Avenue in Cebu City.

Juliet Doverte, head of the Fooda Saversmart  Employees Union, said they staged the strike because they do not believe that the management filed for permanent closure with the Department of Labor and Employment (DOLE-7) allegedly due to financial losses because they have been “hiring new employees”.

Doverte added that regular staff who have been working with the company for years were given only four hours of work while the newly hired ones were allowed to work for eight hours with overtime.

Because of this, Doverte and the other union members are calling on the company to give them back the eight-hour working hours and withdraw the application for permanent closure they filed with DOLE-7.

Doverte, said that the company started hiring new employees in May this year. According to Doverte, management told them that the newly-hired employees are “seasonal”.

Seasonal employees, according to Doverte, are employees hired for a certain time as an additional force during seasons like October to December or not more than four months.

(Why are they hiring seasonal employees when they are supposed to close on September 22? Seasonal happens in October, November, and December. So, they really have plans to remain open?)

Doverte said they are hoping that management will respond to their concerns since as of this posting, they did not hear from any of them.

CDN Digital also tried to reach out to the management through its Facebook page but the latter has yet to release any statement.

Since the said gathering has no permit, policemen from the Abellana Police Station went to the area to advise them to disperse.

Police Major Armando Labora, chief of Abellana Police Station, said that even if they are in maximum tolerance, there were at least two individuals who were apprehended for not wearing face masks during the rally.

Labora added that the employees were given at least 15 minutes to air out their grievances although they were already there for at least five hours since they started their rally at 5 a.m.